Arsenal travel to Selhurst Park for Monday’s Premier League encounter against Crystal Palace. Here is the line-up we expect Mikel Arteta to select

The Gunners have won six of their previous seven league games. This sees them three points clear of Tottenham Hotspur in the pursuit of the final Champions League spot.

Mikel Arteta’s side also have a game in hand compared to their north London rivals. Hence, the club are in a good position to finish in the top four, but still have plenty of work to do.

Arsenal face Palace on the road on Monday and it could be a tricky encounter for them. They are unbeaten in the last five meetings against Palace, but there has been just one victory.

The reverse meeting at the Emirates Stadium this season finished 2-2. Alexandre Lacazette scored a dramatic last-gasp equaliser, much to the agony of Eagles manager Patrick Vieira.

Goalkeeper: Arteta has acknowledged that Aaron Ramsdale had suffered a ‘significant‘ muscle injury. Having yet to return to full training, it appears unlikely that the England star will feature in goal for Arsenal. Bernd Leno looks set for a second-straight league start. The German was assured against Aston Villa, and came up with a key save right at the end.

Defence: Takehiro Tomiyasu has returned to training after recovering from another calf injury, but Arteta may be cautious with him following his setback last time around. Cedric Soares has done a fantastic job as his deputy in recent weeks, and should keep his place for now. The Portugal international has not been a fan favourite, but has been winning them over with recent displays.

Ben White and Gabriel Magalhaes have started every league game for Arsenal since the September international break.  The duo are expected to continue as the central defensive pairing on Monday. Similarly, Kieran Tierney is regarded as an undisputed choice for the left-back position ahead of Nuno Tavares since overcoming his injury troubles earlier this term.

Midfield: In the centre of the park, Granit Xhaka and Thomas Partey are expected to continue for Arsenal. Xhaka has been playing in a more advanced midfield role lately. It has brought the best out of both players. Partey has been in superb form since the turn of the year, and should be high on confidence after guiding Ghana to the World Cup with a vital away goal against Nigeria.

Attack: A solitary change could be on the cards with Gabriel Martinelli reclaiming his left-wing role from Emile Smith Rowe. Both players have made key goal contributions for Arsenal this season, but Martinelli’s direct running and dribbling ability should give him the edge, particularly after a superb individual display against Liverpool. The £34.2m star is set to return after missing the Aston Villa game with an illness.

Bukayo Saka, who has recovered from a bout of coronavirus, appears set to continue on the right wing. The same should be the case for Martin Odegaard in the number 10 role. Alexandre Lacazette is set to lead the line once more despite his struggles to find the back of the net. The Frenchman has not scored from open play since December, but has bagged seven assists in this period. 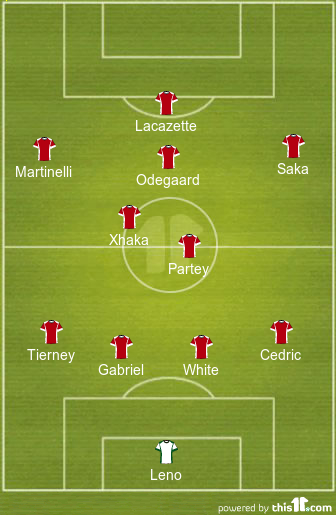