Liverpool take Manchester City at the Etihad Stadium in a titanic clash on Sunday afternoon. Here is the team we expect Jurgen Klopp to select:

Liverpool take on Manchester City at the Etihad Stadium in a titanic clash on Sunday afternoon. Here is the team we expect Jurgen Klopp to select:

Goalkeeper: Alisson Becker is certain to keep his place between the sticks for Liverpool and Klopp will be hoping for another top display as the Brazilian is likely to be a busy man against City.

Defence: There is expected to be one change to the Liverpool defence that started during Tuesday night’s Champions League quarter-final first leg win over Benfica.

Ibrahima Konate scored the opening goal during that 3-1 win in Portugal but he’s likely to drop back to the bench with Joel Matip recalled to line-up alongside Virgil van Dijk.

Trent Alexander-Arnold will start once again at right-back for Liverpool this weekend while Andrew Robertson should keep his place ahead of Kostas Tsimikas at left-back.

Midfield: Fabinho will anchor the midfield for Liverpool against Manchester City and he’ll be a key player to try and keep the likes of Kevin De Bruyne quiet.

Thiago Alcantara has been in terrific form lately so the Spaniard is expected to start once again on Sunday. Jordan Henderson was given a rest against Benfica but the skipper is likely to be recalled against City so Naby Keita will be the man to make way.

Klopp has plenty of other midfield options he could call upon but the likes of Curtis Jones, James Milner, Alex Oxlade-Chamberlain and Harvey Elliott will have to settle for places on the bench.

Attack: Liverpool have an abundance of talent on offer in attack so it will be interesting to see who Klopp selects for this vital top-of-the-table clash. Mohamed Salah is going through a bit of a goal drought from open play but he’s still set to keep his place on the right.

Sadio Mane was on target against Benfica and could start once again. Luis Diaz also put-in another impressive goal-scoring performance in midweek but he may find himself dropping out for Diogo Jota.

The 25-year-old Portuguese international has been in excellent form in front of goal lately so he may get the nod up front with Roberto Firmino having to settle for a place among the substitutes. 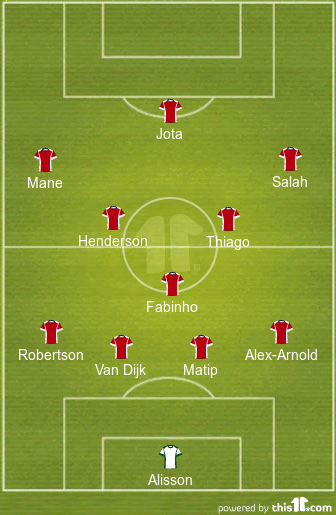