Liverpool take on Benfica at Anfield on Wednesday in the second leg of their Champions League tie. Here is the team we expect Jurgen Klopp to select:

Liverpool take on Benfica at Anfield on Wednesday night in the second leg of their Champions League quarter-final tie. Here is the team we expect Jurgen Klopp to select:

Goalkeeper: Alisson Becker should once again start between the sticks for the Merseysiders. Klopp won’t want to give Benfica any glimmer of hope to get themselves back in the game so he’ll want his No.1 in goal tomorrow.

Defence: The Liverpool boss is also unlikely to tinker too much with his defence so Virgil van Dijk should once again marshal the backline.  Kostas Tsimikas is an option to come in at left-back but Andrew Robertson is expected to keep his place.

Klopp may be tempted to give Trent Alexander-Arnold a rest with Joe Gomez coming in at right-back but we think the Liverpool No.66 will start again tomorrow. However, there should be one change in the back four with Ibrahima Konate coming in for Joel Matip.

Midfield: Fabinho should anchor the midfield for Liverpool once again but Jordan Henderson is likely to get a rest. Naby Keita should be recalled to replace the skipper in the middle of the park.

Thiago Alcantara could also be given a breather ahead of Saturday’s FA Cup semi-final with Manchester City. Klopp has plenty of midfield options with Alex Oxlade-Chamberlain and Harvey Elliott all pushing for recalls but Curtis Jones may be the man to come in.

Attack: Liverpool also have an abundance of talent available in attack so we should see Klopp rotating against Benfica with Mohamed Salah among those given a rest ahead of the City game.

Diogo Jota could also make way after scoring at the weekend with Luis Diaz and Roberto Firmino recalled. Sadio Mane may keep his place in the front three having scored a vital equaliser against City on Sunday. 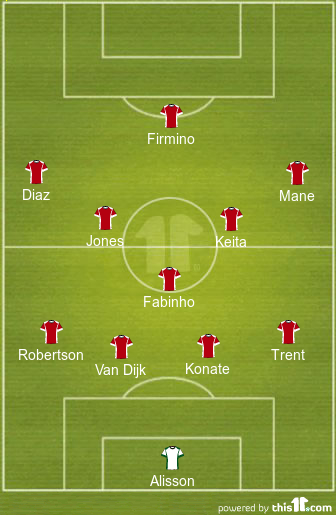