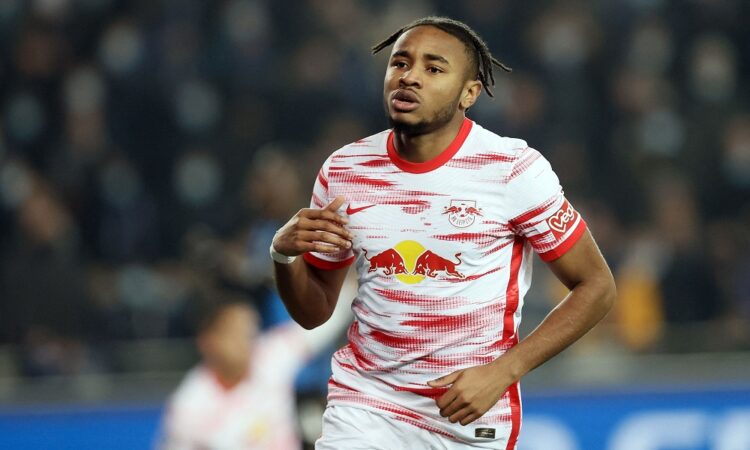 The Red Devils have been linked with the Frenchman for several months, and it has been claimed that interim boss Ralf Rangnick has recommended his services.

It now reported by Bild that Nkunku is prepared to leave the Bundesliga side this summer. United are mentioned as one of the main contenders to sign him.

Nkunku’s former club Paris Saint-Germain have also been credited with an interest, but could be put off by the price tag. Leipzig plan to demand over €75m (£64 million).

Meanwhile, Leipzig have not given up on keeping Nkunku. If he stays, they are willing to up his salary from €3m to €8m per year with a new deal. They plan to include a €65m release clause (active from June 2023).

Nkunku started his career at Paris Saint-Germain as a central midfielder, but has been transformed at Leipzig, where he has largely operated from the attacking midfield and second striker roles.

He has been in sensational form this term with 31 goals and 20 assists from 48 games, and may want to take the next step in his career. Leipzig seem unlikely to end Bayern’s league dominance.

United are keen on luring the Frenchman to the Premier League this summer, but face a big challenge on their hands as they look set to miss out on Champions League football next season.

The Red Devils have had the pulling power over the past few years despite the lack of trophies. However, they are now set for another squad rebuild under incoming head coach Erik ten Hag.

Nkunku would be an ideal fit alongside Cristiano Ronaldo up front next season. He could also play as the false number nine. His creativity should improve the club’s goalscoring exploits.

The main question remains whether Nkunku wants to be part of the transition. It won’t be a surprise if he decides to stay at Leipzig for another year with a buy-out clause being negotiated.