De Jong saga: Manchester United yet to reach an agreement 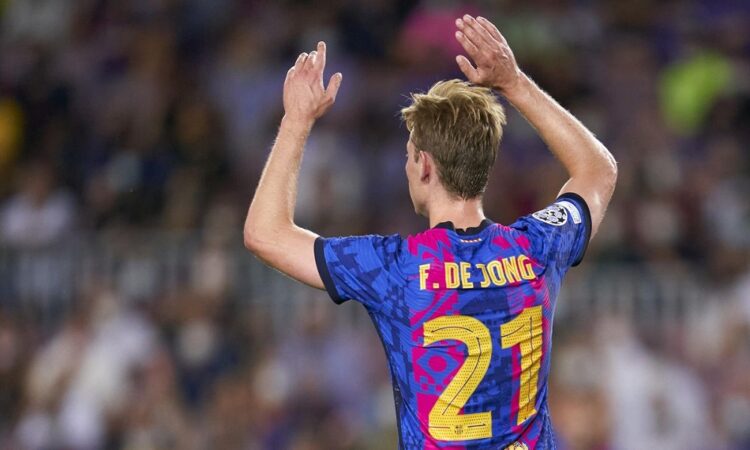 Manchester United are facing a battle to land prime target Frenkie de Jong as negotiations with Barcelona continue to drag on, according to reports.

United have been chasing de Jong for almost two months after Erik ten Hag made the Dutch international his prime transfer target. The new Man Utd boss needs to revamp his midfield after losing Paul Pogba and Nemanja Matic this summer and he wants to build his side around de Jong.

After lengthy negotiations with Barcelona, it was reported recently that Man Utd were finally close to agreeing a deal that would see them pay £56m up front rising to around £74m with add-ons.

However, local Barca journalist Gerard Romero has quashed those rumors by insisting that no deal is in place and Barcelona are demanding United pay £64m up front. The Catalans also want further add-ons that would take the deal up to £74m.

If true, this means Manchester United will have to stump up another £8m up front to get a deal agreed. The Red Devils are determined not to pay over the odds for de Jong as they know Barca are hoping to use them to help ease their financial worries.

Romero says de Jong is in regular contact with ten Hag but has always made it clear his preference is to remain at the Nou Camp. However, Barca are ready to cash-in on the former Ajax star if they are able to land Man City’s Bernardo Silva as a replacement.

Not only that, but according to Marca, the de Jong deal is further complicated by the midfielders contract issues. The 25-year-old agreed to restructure his contract and take a pay cut to help Barca during the pandemic. In return, the club agreed to increase his salary over the next four years.

However, should de Jong leave this summer, the player wants compensation for the money he missed out on over the past two years, so this all has to be negotiated with Barcelona chiefs before a move can be finalised.

Should Manchester United make a third and a final bid?

Erik ten Hag has made signing the former Ajax midfielder his number one priority. The 25-year-old is expected to have a central role in ten Hag’s project and United are desperate to get a deal over the line, but it’s proving difficult.

Now, it would be unwise to back out of this deal. Having chased him for almost two months, Manchester United would be disappointed if they fail to get their man.

Barca are desperate to get out of their financial mess. And, with the Red Devils’ financial strength, an agreement could be around the corner. The club has to work hard to convince the player to join them. If the Catalan giants are assured of getting Silva from Manchester City, they will look to force De Jong out of the club. But, for that to happen, an agreement between the two clubs must be reached.

Manchester United need to pull up their socks this summer. So far, they have only managed to complete the signing of Tyrell Malacia from Feyenoord. They need to make quality additions to their defence, midfield, and their frontline.

Ronaldo has been tipped to leave the club this summer, so they could be looking for a new striker as well. The club insists that he is not for sale but it remains to be seen whether Ronaldo can force a move.

As it stands, Erik ten Hag is focused on building a strong midfield, with Christian Eriksen also said to be closing in on a move to Old Trafford.