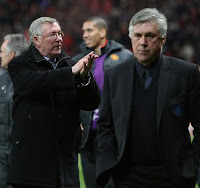 To the disbelief of some, Manchester United defeated their domestic rival, Chelsea, to reach the Semifinals of the UEFA Champions League, which was down to their own self belief.

Over the course of this season, the odds have been stacked against the Reds, whether it has been untimely injuries or ridiculous suspensions, however, the mentality of Sir Alex Ferguson to overcome adversity clearly permeates throughout his entire squad.

The quote, “Sport is 90% mental and 10% physical,” perfectly applied to both of United’s performances at Old Trafford and Stamford Bridge, and the difference between these two English giants come down to the little things.

The superlatives that could be used to describe display from Manchester United were desire, hunger and passion, and all of those intangibles were what ultimately separated them and Chelsea.

Ahead of this match, there were two completely contrasting moods coming out of the respective camps, and it was very uplifting to see just how relaxed Ferguson seemed to be, which, unquestionably, helped relieve some of the anxiety of his players and fans. In the pre-match press conferences, Rio Ferdinand, alongside Ferguson, enjoyed a good laugh, meanwhile, Frank Lampard and Carlo Ancelotti answered their questions in a robotic manner, because they seemed as though they were on knife’s edge to win at all costs.

Having been in this position on so many occasions before, Sir Alex makes sure that his players understand that there is pressure to perform in every match, but he is also fully aware that for him to get the best out of his players, they must enjoy their football. Yes, Ancelotti has been in this position, both as a player and a manager, but there are certain pressures being bestowed on to deliver what is simply becoming an unhealthy “obsession,” as Sir Alex put it, for Roman Abramovich.

Since he took over at Stamford Bridge in 2003, Chelsea has proved that they are a very good side by winning three Barclays Premier League titles, however, to be considered a great team, they must conquer Europe, which requires a little bit of luck and a lot mental. With the purchase of Fernando Torres, Abramovich must have thought to himself that the 2011 UEFA Champions League trophy was all but signed, sealed and delivered to West London, but, from an outside perspective, his signature looks to have disjointed any team unity that the Blues had.

Ancelotti had four decent options in attack before Torres arrived from Liverpool for £50m, but he is now forced to choose from Nicolas Anelka, Didier Drogba or Salomon Kalou to partner him in the attack. The facial expressions of the latter two when they came on showed exactly how disinterested they are to contribute, and, to be honest, Sir Alex would never stand for those type of antics.

To Drogba’s credit though, he inspired Chelsea by pulling a goal back when they looked to be completely down and out, and they played much better as a team after Ramires was sent off for two idiotic challenges on Nani. However, the mental pendulum could have very easily swung the Blues’ way after that, but the response that United gave, just 21 seconds after their goal, was the main difference in the match.

It was good to see that one of the most underrated players to ever where a United shirt to get the decisive goal that killed the closely contested two-legged off. Many people poked fun and thought that Manchester United bought Ji-Sung Park just to sell shirts, but all the South Korean does to combat that belief is put in very disciplined performances on the biggest of occasions.

Park, who suffered a gash over his right eye, was the beneficiary of being in the right place at the right time to smash the Reds back into the lead, which saved the game for United. However, he could not have delivered that killer blow without the service of Ryan Giggs, who assisted on all three of United’s goals in the two matches.

The Welshman, who was rested at the weekend, returned to the line-up and lead with determination and purpose, but Giggs was not the only one that ageless wonder that has continued to defy logic and turned in stand-up performance. Even though pundits will chose one of the goals as the moment of the match, there was a tense play in the first half that could have dictated the outcome of the match.

After Nemanja Vidic’s clearance was blocked by Anelka, it set up a foot race between him and Edwin van der Sar, and although it was the Chelsea forward that beat him to the ball, the long-legged goalkeeper timed his challenge to perfection to halt him in his tracks. van der Sar racing out to challenge Anelka gave some of the United supporters flashbacks to of Fabien Barthez coming out to challenge Diego Tristan against Deportiva La Coruna, but the big Dutchman’s class shone through.

The 40-year old goalkeeper made some imperative saves throughout the match, but VDS had the one-and-a-half center-backs in front of him to thank for keeping Chelsea’s forwards quiet for much of the game. Sir Alex was able to revel at the fact that his inspirational leader, Ferdinand, who has been plagued by a series of injuries over the last few seasons, admirably labored through the entire 90 minutes.

Rarely does he use his left peg, but he suffering from an injury to his right, Ferdinand was forced to solely use his weaker foot for the entire second half. An amazing statistic with Ferdinand is that United has not lost in the 26 matches that he has featured in since the 2-1 loss to Chelsea last season, which shows how influential and vital he is to the Reds.

The 2-1 win over Chelsea at Old Trafford was one of the best performances from Manchester United this season, but, like all great teams, their focus will already be on the next match, which is a Manchester Derby in the FA Cup Semifinals this weekend!