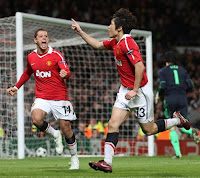 Manchester United travels to the Veltins-Arena to take on Schalke 04 in the UEFA Champions League Semifinals as they attempt overturn their misfortunes against German opposition.

Although they have beat a team from Germany in the group stages and the final, the Reds have never been able to match that feat in any two-legged tie in the knockout stages of the competition.

After advancing to the semifinals of this competition, United has seen a trifecta of varying results in their last three matches, however, the Reds have re-energize their focus on conquering the European Cup for a fourth time, but, as they have done up to this point, Schalke will prove to be a tough opponent.

As it stands right now, Sir Alex Ferguson’s record against German clubs in the quarterfinals and semifinals in Europe is an abysmal one win, five losses and two draws, however, he did manage to beat Munich in the 1999 UEFA Champions League Final.

The only time that the Reds ever tasted victory in those eight matches – a 3-2 win at Old Trafford last season, but it still saw them exit the competition prematurely on the away goals rule, which happened against Leverkusen as well.

United should be expecting the same kind of “typical” German resistance again, but this time from Schalke, a team that the Reds have never met before.

Schalke stunned the reigning European Champions, Inter Milan, in the quarterfinals by beating them quite convincingly at the San Siro 5-2, and then triumphed 2-1 at home to win the tie 7-3 on aggregate.

In the first leg, Inter took the lead twice through Dejan Stankovic and Diego Milito, but goals from Joel Matip and Edu each canceled out their advantage before halftime. Then Schalke went on a three-goal onslaught in a 22-minute span with goals from Raúl, Andrea Ranocchia and a second from Edu to shell-shock the reigning champs.

In the return leg, the Miners sealed a 2-1 win to undoubtedly secure their spot in their spot in the semifinals. Raúl opened the scoring on the stroke of halftime, and Thiago Motta gave the Italians a glimmer of a hope with an equalizer, but Benedikt Höwedes smashed those thoughts with the winning goal 10 minutes from full-time.

Even though Schalke has made it to the semifinals of this competition, the Bundesliga’s runners-up from last season are not enjoying a very good campaign this time around.

Domestically, the Royal Blues are sitting in 10th place in the table, a far cry from the one that earned them a place in this season’s competition, but they could finish in their lowest position since the 1999/2000 season.

The most surprising part about Schalke’s seven goals in two games against Inter was the fact that they are third from bottom in the German league with only 35 goals scored.

Defensively, they are much, much better, but even though they are second best in the league, the Miners are still 16 goals off Borussia Dortmund, a team that knocked United out of Europe in the late 1990s.

The Royal Blues have a couple of players that Ferguson has been interested in, but he was unable to land either one of them. The first is their goalkeeper, Manuel Neuer, who has just recently announced that he will be leaving his boyhood club after 20 years of service join another club that will be in Europe next season, which is most likely Bayern Munich.

The other player that the Gaffer tried to sign was Raul, who left his only club Real Madrid last season, but apparently German football had more of an appeal to him than Old Trafford, and, to be fair, the Spanish legend has shown that he still has lots of life in him as he leads the club with 12 Bundesliga goals and has further five goals in Europe.

In the middle of the field, where the Reds have had trouble all season long, Ralf Rangnick has a few players that he likes to rotate throughout his team, but Jose Jurado and Jefferson Farfan have been his playmakers in the Champions League this season.

Ferguson has a couple of injury concerns ahead of the match with Dimitar Berbatov, who played for a six seasons for Leverkusen in Germany, missing the last two games with a slight groin injury has not traveled. The other concern, a fresh one, with John O’Shea leaving the match against Everton early as it look like he suffered another hamstring injury.

However, Sir Alex will have Paul Scholes, who has missed the Reds last two matches because of his three-match ban, available for this match, and his big-game experience could vital against Schalke.

Manchester United are never given an easy time when they travel to Germany, and they should expect the same when they go to the Veltins-Arena on Tuesday and face Schalke 04, but the Reds have loads of experience and quality to overcome this last hurdle.