Roses are red, Violets are blue, Torres is ours now, Who the hell are you? 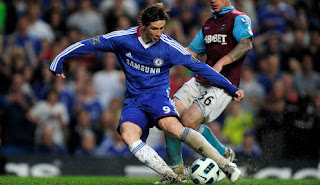 Well, well, well……I am certainly a late blogger to write about Torres’ first goal, but really I am not here to celebrate our 50 million star’s 1st goal for Chelsea. But I am here, to say something different. Well, this article is short, when compared to my previous ones, but I am here to punch the faces of the fans of the club, a club who always keep on chanting about their so-called ‘Great History’!!!!

Fernando Torres came from Atletico Madrid and scored goals for the scouse, and notably he was the only person, alongside Gerrard who were the reason, when the club prevailed. They used to worship him, some even had the name, ‘Torres’ printed on their shirts, but when Torres was fed-up with them after getting no trophy, and even not an assured Champions League place and left for Chelsea to pursue his future, they started to mock him??!! Well, are they human beings? Isn’t it their prime duty to remember what Torres had done to their so-called, ‘Great History’ and forgive him? Phew,……well, after John Terry said to forgive Joe Cole for his transfer to Liverpool, and to remember his contribution for the Blue Badge, we refrained from disrespecting Joe Cole. So at least, even if Chelsea dont have the great history, they certainly have the correct ‘respect’, which every type of player wants from the fans. And Torres also said that you all should be grateful, as he didn’t join your eternal rivals, Manchester United.

“I did not want to go to Manchester City or Manchester United. I could never do that, out of loyalty to Liverpool,’ said Torres, who was targeted by both City and United during last summer. “

See, he has some respect towards you all, but you dont have something for him. Torres did go goal-less for 13 games, and was destined to go goal-less for even more matches for Chelsea, but certainly, he broke his duck!! And in those times, Liverpool were making numerous Facebook pages, and abusing our Fernando Torres. But certainly, this is the goal which may have made them silent for the time being.

Well, I have nothing to say more than this, but can you tell me Liverpool fans, how come you still vaunt about your history? Everton, Sunderland, Aston Villa have 22 league titles between them, but they are now being regarded as mid-table clubs!! Then, how dare you come and show your might in front of the English Champions, being just a mid-table club yourself? You cant even qualify for the Champions League, and you haven’t won the league for 21 years, so how can you come with banners and hoardings to Stamford Bridge, to remind us of your history??!!

Well, you know only 4 teams have won the Premier League, even Blackburn have won it, but certainly, you haven’t won one yet!! Isn’t it a ‘disgrace’ to your famous history? So please, try to believe that Torres made a right decision in joining a smaller club in regards to history, but a bigger club in regards to Respect. Respect is much bigger than History, Kops!