Make Up Your Mind Maarten – Arsenal or United For Stekelenburg 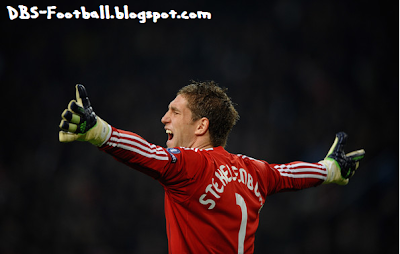 It is usually good for players to be ambitious, but playing for two football clubs simultaneously is a bit much. However, if we are to believe what Maarten Stekelenburg has said, it seems he would be ready to play for both Manchester United and Arsenal if they were to come calling.

Of course, there is the far more likely possibility that he would choose between the two if they were to offer him a deal. Yes, that seems more likely. But even then, as such a big fan of the two rivals, who would he choose? Back in March, the 28 year-old Dutch World Cup finalist said this:

“I have possibly played my last game for Ajax. If an offer from Arsenal arrives, I will leave.”

From that, you would think that Arsenal were his favoured preference if a choice were to present itself. He would be a good, experienced addition to an Arsenal side crying out for some solid, strong defending and goalkeeping. He would slot right in at the Emirates, and could very well help them to trophies.

He has also been rumoured to be interesting Manchester United, who are looking to replace Edwin van der Sar when the veteran goalkeeper retires at the end of the season. Manchester United have confirmed they will buy a new goalkeeper, and they have their eye on one in particular – though they teased everyone by understandably not revealing who. Stekelenburg is hopeful he is the man, as today he said:

“I have received a fantastic offer from Ajax which is under consideration. There has been nothing else, zero. Maybe because I have been injured.”

“Anybody who does not want to play for Manchester United would be insane.”

Stekelenburg is a massive 6 foot 6 inches, and has played 282 times over nine seasons at Ajax as well as making 40 appearances for his country, including the World Cup final in 2010 against Spain. He has completed 26 games in the Dutch League this season, keeping 13 clean sheets, but has been injured for a little while after breaking his thumb.

So a choice will have to be made by Stekelenburg over his future soon, with only 1 year left on his current Ajax contract – will it be Arsenal, or Manchester United – or will he take up Ajax’s “fantastic” offer and stay in Holland?