The countdown to the Champions League Final is well and truly under way, with the 28th May fast approaching for football fans all over the world. Two of the best clubs in Europe will fight it out to see who proves to be the best on the night, and Manch… 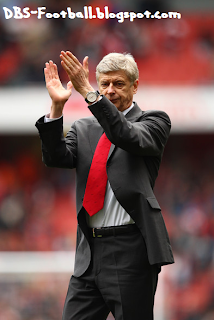 The countdown to the Champions League Final is well and truly under way, with the 28th May fast approaching for football fans all over the world. Two of the best clubs in Europe will fight it out to see who proves to be the best on the night, and Manchester United and Barcelona are sure to put on a fantastic show.

Both sides have massive fan bases, and just for this special occasion, United can add both the Arsenal boss Arsene Wenger and ex-Chelsea boss Carlo Ancelotti to the list of supporters. Arsenal’s manager Arsene Wenger believes that Barcelona are looking tired and United will face them at the best time, with Ferguson’s side looking as sharp as ever.

The only final Arsenal reached this season was the Carling Cup Final against Birmingham which they lost through a miserable defensive mix up. Wenger said that this is a Champions League Final – the team is entirely different, as is the manager, and the result will be improved from the last time United faced Barcelona in a European Cup Final two years ago.

The Arsenal manager spoke in depth about the occasion:

“For me it takes three weeks to recover physically, I’m not sure Barcelona will have had enough time. They looked on their knees so I would give United a good chance.

“I have an instinctive feeling United will change completely their style against them this time and go for a rougher midfield, a more direct display than they did in Rome.

“That can mean playing [Javier] Hernández still, but using him as a runner to go very direct. I don’t know what they will decide, but that is basically the only uncertainty you have. You know how Barcelona will play.”

“You don’t know yet how United will play. But Ferguson is my manager of the season. They are in the Champions League final, they have won the championship. It can only be Ferguson.”

Carlo Ancelotti went into less detail, but was likewise very supportive of Sir Alex. Asked who he thought would win the game, the Italian said:

“I am not a magician. I think that for a lot of people the favourite team is Barcelona.”

“But as I have seen Manchester United play their last games, they have very efficient team. They are very strong, they have confidence in this moment, I think that the game will be in balance.

“I hope that Manchester United will win. I hope, for Ferguson.”