The Manchester United owners may be supremely unpopular at Old Trafford, with the majority of United fans wanting the American family to leave as soon as possible, but they have apparently given the go ahead to a big summer of signings for Sir Alex Fer… 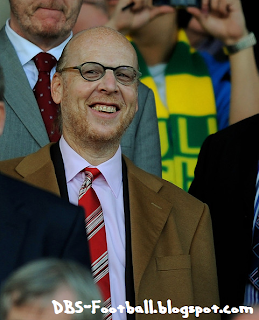 The Manchester United owners may be supremely unpopular at Old Trafford, with the majority of United fans wanting the American family to leave as soon as possible, but they have apparently given the go ahead to a big summer of signings for Sir Alex Ferguson.

Reports suggest that the clubs bank account will rise to £169 million due to huge profits this season thanks to massive sponsorship deals. This will be added to the £80 million from the Ronaldo sale which is largely still unspent, and it adds to a very healthy transfer fund for Sir Alex to do with it what he pleases. One insider said: “What Sir Alex wants, Sir Alex will get.”

Of course, the transfer policy will remain the same; young players with big potential and a decent resale value is what the Glazers and Ferguson have agreed on, with only one player in the past 14 years having been over 27 and cost more than £3.2 million – Dimitar Berbatov.

And with United set to have raked in a whopping £50 million from their Champions League journey if they beat Barcelona on Saturday, it is understandable that the Glazers are said to be “relaxed” about the United manager bringing in at least one marquee name to the squad.

After the sale of Ronaldo and the departure of Tevez in quick succession, doubts were raised, if they weren’t already about the Glazers long term ambition with United. Wayne Rooney needed the persuasion of a mega money weekly contract renewal to convince him of that ambition, and he must have been told about the funding Sir Alex had when they had those crunch meetings about his future.

The United chief executive has said again and again when questioned that Sir Alex has money at his disposal, doing his utmost to defend the Glazer ownership and handling of the club. This summer may be the summer in which these claims are supported with the showing of cash and the purchasing of players who will be brought in to help United to further success.

The last time United spent substantially was back in 2007 when Nani, Anderson and Owen Hargrevaes were brought in for around £17 million each. Injuries have been a big downer on Hargreaves and Andersons success, with Hargreaves recently released, but Anderson and Nani have begun to show what they are capable of – especially the latter.

I hear that a deal for Ashley Young is close, while the situation with Arsenal’s Nasri is that due to his close expiring contract, his agent has leaked United “interest” to the media in the hope that Arsenal will act by offering Nasri and new, improved contract. Modric and Sneijder would indeed be marquee signings, but would perhaps cost too much.

Despite the big money signings being rumoured, Sir Alex could always look to his youth side, and with a few exciting young talents coming through may decide to slowly begin to integrate them more in the team, much like he did with the class of 1992.

Nevertheless, the funds are there for Sir Alex to spend, and whether he raids Arsenal for Nasri, tests Inter Milans resolve for Sneijder, or tempts Luka Modric with Champions League football is down to him. United fans should confidently leave it all in his very capable hands.