Would Hargreaves Have Made a Difference v Barca?

As Manchester United stood on that Wembley pitch at the end of a long, tiresome, punishing 90 minutes, their knees would have been quivering and their teeth gritted at the sight of Barcelona once again lifting the Champions League trophy at their expe… 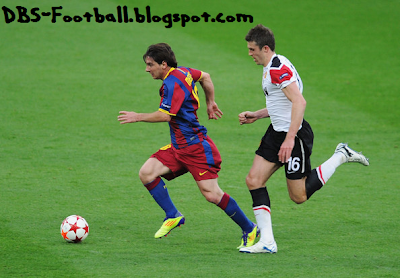 As Manchester United stood on that Wembley pitch at the end of a long, tiresome, punishing 90 minutes, their knees would have been quivering and their teeth gritted at the sight of Barcelona once again lifting the Champions League trophy at their expense. Of course, United accept that the Spanish Champions deserved it and were better on the night, but they would have been wondering as they stood there with bitten lips and exhausted bodies, what exactly they could have done differently.

The battle, the pundits said, would be in the middle, in the midfield. Whoever wins that battle would win the game. On paper there was only one winner, and in practice that proved to be too true. Michael Carrick and Ryan Giggs are very good footballers in their own right, but if Manchester United wanted to prevent Messi from weaving his magic as well as Xavi, Iniesta, Busquets and Pedro all wreaking havoc, they needed some players, or at least one play with the capability of breaking it up before the last line of defence.

It was just unfortunate that possibly the only man in the Manchester United team who could have done this job effectively and to a high standard had not played 90 minuted in the United kit all season and had recently been confirmed as released by the club because of his fitness. Yes, that man is Owen Hargreaves, and yes, I believe that if he was fully fit and deployed in his defensive midfield position behind Carrick and Giggs, the game would have panned out differently, and possibly better for Manchester United.

The fact of the matter is, Lionel Messi had too much time and space to unleash the shot for his goal and Barcelona’s second and effectively, their winner. It killed off an already weary United side who had been chasing all game. Imagine if Hargreaves was playing, and imagine, would Messi have been allowed that time – the time he needed to pull his magic little foot back and pull the trigger? The shot was a pretty average one, and one that the retiring van der Sar will be slightly disappointed about not saving, but the answer to the question is no. Hargreaves would not have allowed Messi that time to shoot.

Think then, about David Villa’s absolutely beautiful goal to seal the victory. There was nothing the goalkeeper could have done about this one, unless he had stood next to his post as if somehow possessing the ability to see into the future to see where the shot was going. That goal was placed with finesse that sums Barcelona up well, but what sums Owen Hargreaves up is his gritty, hard-working, tireless attitude, and the definite ability to stop Villa from having that space to shoot.

With a more compact midfield, including that defensive midfielder, which could have perhaps been played by the ever energetic young Anderson or maybe only in the second half due to illness, Darren Fletcher, Manchester United may have fared better than a few small bursts forward.

United have excellent capabilities when attacking themselves, but after pressing, pushing and chasing for pretty much the whole game, the tired legs and tired minds against the energy of the greatly unchallenged defence and covering midfield, of Barcelona, only a very well worked goal could be managed.

The endless chasing meant that when they had the ball, the only player left already up field was Hernandez, and so only a hopeful long pass was managed to him which got lost on the bounce or lost in the forest of Barcelona defenders. When United got the ball on the floor to pass it, Barcelona, who had not been pressing to the extent of United, could easily take the ball and press further down the pitch. With an insurance policy in the guard in front of the United back four, Sir Alex would have seen his side win the ball back faster and keep the ball more to allow for a better attacking and defensive option.

What I am saying is, there were two very avoidable goals conceded by Manchester United, and if there were a defensive midfielder deployed in place of a largely ineffective Javier Hernandez, United would have fared better. The argument is based on “ifs” and “buts”, however, “if” Sir Alex wants to come back next year and win the Champions League like he undoubtedly does, then he needs to find or nurture a player in that position.

Barcelona were the better side, and overall deserved to win the prestigious trophy for the fourth time in their history, but they are by no means unbeatable. United and other top teams will come back fighting next year as Barca seek to defend their crown, and though it will take some doing, it will be done.