Five Reasons Why King Carlo Had Just To Leave 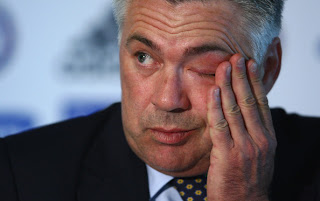 So we lost to ten man Everton on the last day of the league, which resulted in King Carlo losing his managerial job. The loss was just a summary of just how poor we were this season despite finishing as runners up. Few will blame Carlo for the problem but as the manager he is responsible for our success as well as our failures. The last thing I expected was, Carlo Ancelotti was sure to be sacked as the manager, but I was in full support of him to continue for another 5 years as the manager. Unfortunately, Roman had other ideas. On Sunday I was unable to sleep over it, but I woke up on Monday with full support of the club’s decision. Here are 5 reasons why I think it happened.

This is the major weakness I saw during Ancelloti term. We had no specific “first 11”. Only a handful of players were guaranteed the first place, i.e. Terry, Lampard, Cech, Ashley Cole, Ivanovic and somehow Ramires and magnificent luiz. All the others knew their fate a few hours before the start of the match. I will give some examples. During the semifinal of the Champions’ League, he left Ramires and Drogba out of the starting line up in the second leg and started with Torres who was low on confidence. Also you don’t have faith in young players like Josh McEachran, who have impressed in the few minutes, they have played for the club. He also substituted Drogba and left Anelka (he just has to leave) in the Man City game, back in September, which we lost by a single goal and brought Sturridge in the last 15 minutes. Sturridge played well but he had no target in the box as Anelka loitered in the midfield. This meant our team had no coordination unlike last season where there was a team for specific games.

Carlo’s inconsistency in performance is not new to him. He started his career at Reggina where he promoted them to serie A in his first season but left to Parma. In Parma, he made them qualify to the Champions’ League but finished fifth in the second season to at least guarantee them a UEFA CUP place. He stayed there for 2 seasons. In Juventus, won a cup in the first season but went trophyless in the next two but at least secured 2nd place. So is his case with Chelsea. Moreover we had a funny win-lose pattern this season. No consistent wins. We won 1 game in pre-season and also lost in the community shield. We started the league with two 6-0 wins and other wins but succumbed to Newcastle in the carling cup. Then we went on to lose to man city in the league, couple of games, beat arsenal, then Liverpool walked over us which started our poor form. We lost 3-0 to Sunderland, beaten by Birmingham, drew with Newcastle, Everton, tottenham, we were gunned down by arsenal, and Aston villa equalized late against us. Then we lost to below Par Wolves. We were 9 points of Manchester united but we went to trail them by 15 points. In fact 18, during halftime of the game with them on March 1st. somehow he recovered to get close to three points but blew it when we lost two points to Stoke and finally losing at old Trafford. Furthermore he did not get a win in his last two games. He is unpredictable…… in a bad way.

The club has been undergoing major changes since they decided to release the Magnificent Michael Ballack and other ‘not-so-magnificent’ players. Our assistant coach left so did our director of football and youth Chief Frank Arnesen. Ray Wilkins also left after his contract ended and was not sacked as claimed. So I don’t know why Ancelloti whined a lot because he should have planned for it. We saw how the change of one man (Ray Wilkins) affected our performance for the rest of the season. Thus we need to change all the positions at once to start afresh. This is the right time to bring another manager along with other scouts and directors. Remember this is what Roman did when he bought the club and you all know the results. Hope this will work.

4. ROMAN ABRAMOVICH HAD TO MAKE A STATEMENT.

Yeah. I know all the fans were disappointed including me when Carlo was axed. But Roman was doing this for the fans. He had to make a statement to us to ensure that he is still in full control of the club. To make sure that the club still performs. To make sure that we still win trophies. The club statement that was released, when Ancelloti was sacked said it all – due to the club’s dismal performance this season. And by sacking Ancelloti he made that assurance that he is there for Chelsea to win trophies and does not condone poor performances.

I will just leave it at that. That is my obsession with the ‘big-ears’ trophy, so is Roman and most importantly so are you. That is all I have to say.