While Arsenal battle to keep hold of one of their vital play makers, Samir Nasri, another player, who can be considered a little less important in terms of Arsenal’s future challenge for trophies, Emmanuel Eboue may be on his way out of the Emirates. 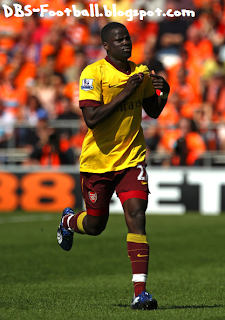 While Arsenal battle to keep hold of one of their vital play makers, Samir Nasri, another player, who can be considered a little less important in terms of Arsenal’s future challenge for trophies, Emmanuel Eboue may be on his way out of the Emirates.

Newly promoted Queens Park Rangers manager, Neil Warnock is said to be interested in bringing the Ivorian to Loftus Road. The 28 year old’s experience and versatility at the top level of English football could prove crucial in QPR’s fight for survival next season, and Eboue, who has proved a useful squad member at Arsenal may be a player forced out of Arsenal as a result of Wenger’s busy summer of transfers.

A sale would add to Arsenal’s spending power in the market – not by much, but surely enough to add to the transfer kitty that Wenger has been so reluctant to use over the past few years. QPR would offer Eboue the chance to stay in London rather than relocate to a foreign country where he has been linked to Roma in Italy.

Eboue would add his athleticism, tireless attitude and versatility to QPR as well as his enthusiasm and comical personality – often seen as the joker of the Arsenal side off the pitch. On the pitch however, he can be equally as comical with sometimes unpredictable errors and mistakes which have often proven costly for Arsenal over the seven seasons he has been there.

Meanwhile, Johan Djourou, Arsenal’s Swiss defender has tried to get his team mates and manager inspired and prepared for next season where he hopes to reward the patient Arsenal fans with success. On the back of the 2 – 2 draw with England he said:

“Obviously, now we want to do better as a team and as individuals to get something. I think that the fans deserve and the manager deserves something. We need to get better, get stronger, and really prepare well for next season.”

When questioned about Arsenal’s busy summer ahead, and what impact the possible new recruits may bring, Djourou was less certain but insisted that new players and competition for places is always good:

“I don’t know – that’s for the manager to answer. I think competition is always good. That pushes you in your position. When you want to make a team better, you have to have a good squad. I think that we had a good squad but if players with experience or different players can bring quality, they’re welcome.”