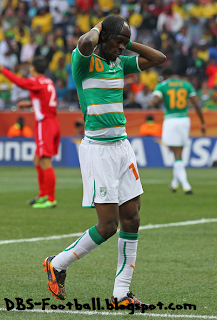 It is looking more and more likely by the day that Lille will be forced to let go their star striker, Gervinho, amid growing interest from the Premier League, mainly from Arsenal

Arsenal, Liverpool and Tottenham are all fighting for the signature of the Ivorian forward, with Arsenal reported to be in “pole position”. However, for any chance of Gervinho joining Wenger at Arsenal, the manager would have to be willing to spend around £15 million on the 23 year-old, whose contract expires in 12 months time.

Liverpool have apparently placed a bid of £11 million for Gervinho, but Lille, who were thought to be prepared to sell their striker for only £6 million at the start of negotiations rejected Liverpool’s offer, and requested a £4 million improvement.

According to several news sources, Arsene Wenger has been impressed by Gervinho this season, as the Arsenal manager watched his target score 14 goals and assist 9 for a Lille side who eventually won the Coupe de France – the French equivalent to the English FA Cup.

Gervinho said he would decide his future after his country’s African Cup of Nation’s qualifier against Benin today, and now that the game is over – Ivory Coast won 6 – 2, and qualified for the competition – an announcement should be close.

Arsenal’s search for a striker has also led them to a reported bid of £4 million for West Brom’s Peter Odemwingie. However, that deal now seems increasingly unlikely, because of the, firstly the size of the bid, and secondly, Roy Hodgson’s adamant stance that Odemwingie will remain at the Hawthorns next season.

“I’m confident of keeping our top players, including Peter. They have contracts and the club are not keen on selling.”

“We don’t need to sell players because everyone knows Albion are a well run club. We have no debts and we are not in the situation that many clubs are in, having to sell to match budgets.”