Manchester United have signed Blackburn’s young central defender and occasional defensive midfielder, Phil Jones on a 5 year deal thought to be worth around £16 million. There has been some speculation over his medical and whether he failed it or … 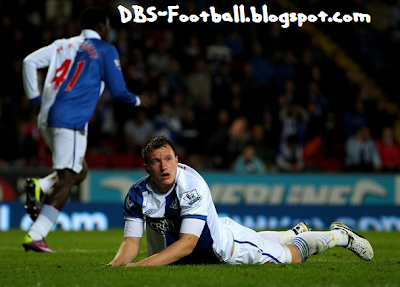 Manchester United have signed Blackburn’s young central defender and occasional defensive midfielder, Phil Jones on a 5 year deal thought to be worth around £16 million. There has been some speculation over his medical and whether he failed it or not, with some saying he has failed it, while other say that United simply want a second opinion – perhaps in particular on his knee which was injured in December and required surgery as well as 5 months recovery. Amid the speculation, one thing is for sure; Phil Jones is a very bright young talent and set for a very fruitful future as a Manchester United and England defender.

Jones was wanted by a number of clubs including Arsenal, Liverpool and Tottenham, with him even meeting with the Arsenal manager Arsene Wenger to discuss a move after a bid was accepted for the 19 year-old. However, Jones chose a move to Old Trafford over Arsenal, a move which sees him join fellow Englishmen Chris Smalling and Rio Ferdinand at the heart of the Manchester United back line. He will also be welcomed by United’s Nemanja Vidic, who will have plenty to teach his young competitor when the squad rejoins for the start of the season.

This £16 million signing, may seem a big investment in a young player, but Jones is a powerful young who will fight to prove his worth on footballs biggest stage. He may have a lot of eyes watching expectantly, but I am confident Jones has the quality and potential to live up to expectations, as he sets out to impress Sir Alex Ferguson and the rest of the world. Indeed, it is unlikely he will immediately be thrown into the defence, especially when United already have a central partnership which has been praised as one of the best in Ferdinand and Vidic. Like Smalling, Jones will have to bide his time, and gradually see himself integrate into the team as the older players begin to lose their legs. 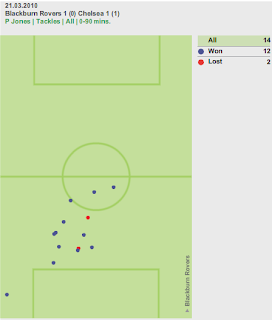 Jones’ breakthrough season came just two years ago at Blackburn under Sir Alex Ferguson’s good friend, Sam Allardyce. “Big Sam” may have been consulted by Sir Alex over the player before the signing, but the United manager would have surely had his eye on Jones before then, after all, he doesn’t want a repeat of the Bebe situation. Jones continues to impress this season too, with a very respectable 25 appearances for Blackburn in the Premier League, giving him some well needed experience for the young talent.

In those 25 appearances, Jones came up against several of the top sides in the League, and faired pretty well, with solid performances which clearly caught the attention of top clubs. Wayne Rooney said on Twitter today that Jones was “1 of the toughest defenders I played against last season”, which is some praise for such a young guy, as Rooney is certainly no push over.

In Jones’ début in the Premier League, he came up against Chelsea. With Chelsea comes Didier Drogba, who ended that season as the League’s top goalscorer with 29 goals – three ahead of Wayne Rooney. It started badly for young Jones, who saw Drogba score early on, but as can be seen in the chalkboard above, he recovered well, with plenty of successful tackles in his position, breaking up attacks, winning the ball and starting up Blackburn’s own bursts forward. Credit to the young lad who was making his début, he was able to keep out the Leagues most prolific striker for 85 minutes, and this is something Sir Alex will no doubt be desiring when he pulls on a Manchester United shirt.

Manchester United have invested heavily in young English defenders now, with Chris Smalling coming in last year for £12 million and now this £16 million signing. However, if Jones settles in as well as Smalling has in the 33 games he has played for United so far, then the Red Devils have a formidable up and coming defence to look forward to when Vidic and Ferdinand are gone.

The United manager may not have decades left in him as United manager, but he is certainly planning ahead, and building the foundations once again for a successful and fruitful future for Manchester United even when he has retired. With United’s own youth looking very promising too, it is exciting times for United. Now however, they will be judged on immediate success as always, and will be pushing for that stunning record of 20 League titles next year.