Dumped out of the competition last season at the hands of West Ham by losing 4-0 at Upton Park, Manchester United prepare to regain the Carling Cup as they start their campaign on Tuesday at Elland Road, the home of fierce rivals Leeds United. Leed…

Dumped out of the competition last season at the hands of West Ham by losing 4-0 at Upton Park, Manchester United prepare to regain the Carling Cup as they start their campaign tonight at Elland Road, the home of fierce rivals Leeds United.

Leeds might be currently lying a division below in the Championship, but Sir Alex Ferguson will know very well that Leeds are capable of raising their game when they play the Red Devils in front of their crowd.

Traditionally, Ferguson has utilised the tournament to give the youth & fringe players a chance to challenge for the first team spots, and this time should be no different. There are quite some players in the team who haven’t been utilised till now, and it would be ideal for the manager to provide them with game time.

As Sir Alex told the press after last week’s midweek Champions League draw at Benfica, Anders Lindegaard will don the keeper’s gloves on account of his sparkling displays. Given the lack of quality defenders in the lineup due to injuries to Vidic, Ferdinand & Rafael, the back four will bear a similar look apart from the position of left-back, where Fabio Da Silva might start to give Patrice Evra some much needed rest. Michael Carrick, who didn’t play in the game versus Chelsea, will probably start in the centre of the park. He will be possibly complemented by out-of-favour midfielder Darron Gibson, who hasn’t played a single game for the first team this season. However, Gibson faces stiff competition in the form of highly-rated youth player Paul Pogba, who has been tipped to play by the gaffer himself –

“He’s got a slight injury, it’s not too bad, though. So he wasn’t available for Sunday but he should be able to play on Tuesday and I intend to play him against Leeds United.”

On the flanks, it is safe to say that Luis Antonio Valencia will start on the right while either of Ji-Sung Park or Ryan Giggs will play on the left. Given the nature of the fixture, Ferguson might go with Giggs as he provides the required calm & composure to a young United side, apart from invaluable experience.

Coming to the striking department, this is where Ferguson has a selection headache. Experience in the form of Dimitar Berbatov & Michael Owen, or the vivacity of youth in the form of Macheda & Diouf? The manager surely has some questions on his mind, but it will be sensible to rely on experience & hand rather rare starts to Berbatov & Owen. According to me, Manchester United’s starting lineup tonight will look somewhat like this – 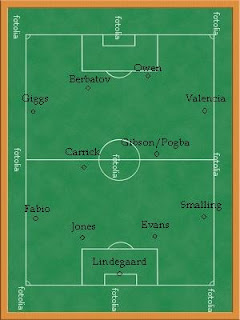