After an
exhilarating midweek 3-3 draw against FC Basel in the Champions League,
Manchester United prepare to put behind their defensive woes to face Premier
League new boys Norwich
City on Saturday at Old
Trafford. The Canaries might not be one …

After an exhilarating midweek 3-3 draw against FC Basel in the Champions League, Manchester United prepare to put behind their defensive woes to face Premier League new boys Norwich City on Saturday at Old Trafford. The Canaries might not be one of the most daunting opposition as such, but the midweek game taught just that the Red Devils better not take their opponents lightly.

Norwich City have been on the rise for the past two seasons since Paul Lambert took over, and have achieved promotion twice to make a huge leap from League One to the Premier League. They are also currently riding high on confidence, having beaten the likes of Bolton & Sunderland in their last couple of games.

As for Manchester United, Sir Alex Ferguson was unhappy with the kind of defending that took place against Basel. From being 2-0 up at half time, the home side were 3-2 down until Ashley Young saved the blushes with an
injury-time strike. It is very unlikely that the manager will change the entire lineup, however he will demand no complacency from his players against Norwich City.

Coming to our possible lineup for tomorrow, David De Gea  has played two consecutive games now, at Stoke last Sunday & then against Basel on Tuesday. So it will be ideal if Sir Alex decides to give the young Spaniard some rest &
hand Anders Lindegaard his first ever Premier League start. Both of those results were exhausting draws, and De Gea no doubt needs bit of a break to recover & be fresh for the Liverpool game after a fortnight’s break.

Good news is that our first choice strike duo Rooney & Chicharito are fit to face Norwich City, and so is defender Jonny Evans. Skipper Nemanja Vidic, Smalling & Cleverley will be back for the Liverpool game as well, so that provides some relief as far as injuries are concerned.

The Red Devils will probably miss Rio Ferdinand’s presence in central defence (given he’s played two games on the trot & is embroiled in a court case at the time of writing). So Jonny Evans will take his place, alongside young Phil Jones. Evra will retain his place on the left, which means either of Fabio or Valencia plays right back.

Midfield shouldn’t be much altered from what we saw in the game against Stoke City, and the central midfield pairing of Anderson & Fletcher would do just fine. Young & Nani (who didn’t play on Tuesday) will be the automatic choice for the flanks.

As reported earlier today, both Wayne Rooney & Javier Hernandez are back from injuries & should probably start. Daniel Welbeck played the whole 90 minutes on Tuesday, so he will probably be used from the bench as an impact substitute. Berbatov, who was a late substitute against Basel, might have a distant chance of getting a start in case Ferguson has any doubts as such over Chicharito’s fitness. 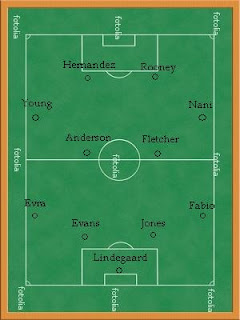