Manchester City make the short trip to the DW Stadium to play Wigan Athletic tonight looking to put daylight between themselves and rivals Man Utd at the top of the table.

United kept the pressure on the Blues after beating Bolton 3-0 at Old Trafford on Saturday moving them level on points with City, with only goal difference now separating the two sides.

Roberto Mancini will look to get back to winning ways after back-to-back defeats against Manchester United and Liverpool in the domestic cups.

City are without influential pair Y. Toure and K. Toure, who are both away on international duty with the Ivory Coast.

Vincent Kompany continues to serve his four-match ban following his controversial sending off against Manchester United last weekend. Youngster Savic should continue alongside Lescott in defence.

With the array of attacking talent at Roberto Mancini’s disposal, it’s not easy to predict who’ll get the nod. David Silva is expected to return after missing the mid-week defeat to Liverpool while Mario Balotteli is a doubt with an ankle injury.

James Milner and Adam Johnson will battle for a place in the starting eleven. 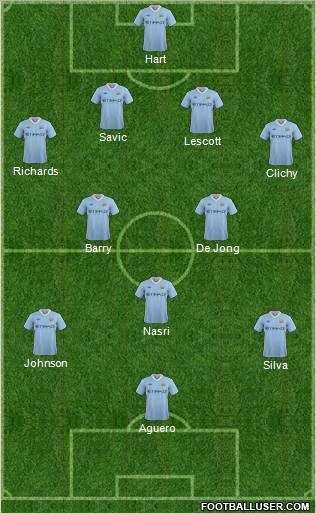 Wigan usually raise their game when the big-boys come to town and an evening kick-off at the DW Stadium will not prove an easy task for Mancini’s men. However, City should still have too much firepower for Wigan and we predict a 0-2 win.

Leave your opinions on the match in the comments section below…