Tottenham kick off the weekends fourth round FA Cup action tonight as they face Championship side Watford at Vicarage Road.

All the pre-match talk has centred around Spurs manager Harry Redknapp and his trial for TAX evasion, and despite spending the week in the dock, Redknapp will be in the dugout for tonights game. Assistant Kevin Bond has been taking care of training during the week and he believes the team wont have been effected by the gaffers absence.

Tottenham will be looking to bounce back after last weeks controversial last-minute defeat to Man City, by booking their place in the last 16 of the FA Cup.

Assistant Kevin Bond took the weekly press conference this afternoon and confirmed Harry Redknapp will choose the starting eleven for the game.  The boss is likely to rest several first team players as Spurs have an important league match against Wigan on Tuesday.

There are doubts over Ledley King, Younes Kaboul, Scott Parker and Gareth Bale who all picked up knocks during the week, so it’s highly likely all three will be left out. William Gallas, Sandro and Tom Huddlestone remain out through injury.

Roman Pavlyuchenko is likely to start up front alongside Jermain Defoe, while youngsters Jake Livermore and Danny Rose should also be given a chance to impress.  Squad players Sebastien Bassong, Niko Kranjcar and Steven Pienaar are also likely to start. 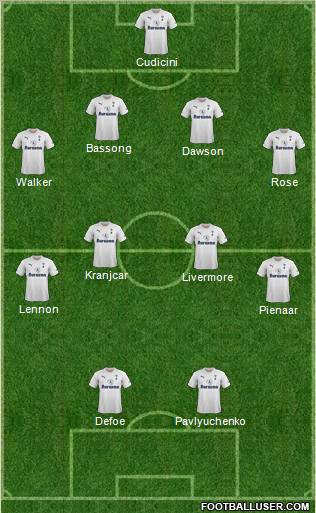 Even with a virtual B team, Spurs will have too much for Watford, who are struggling in the Championship. 0-2 to Tottenham.