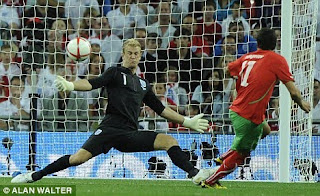 Take a look at the winning teams from recent Premier League years. Manchester United, Chelsea, Arsenal. All had reliable, trustworthy, established and confident goalkeepers. United had Schmeichel and now have Van Der Sar, Chelsea had, and still have Petr Cech when they won consecutive Premier League titles in 2005 and 2006, and Arsenal had Jens Lehmann in their “Invincibles” team of 2004. Who was in goal in 1966 when England won the World Cup for the first and so far only (and possibly last) time? Gordon Banks – elected in a poll by the IFFHS (International Federation of Football History Statistics) as the second best goalkeeper of the 20th Century.

Joe Hart is showing all of the qualities to become a top quality goalkeeper – on the same, and with his potential, possibly higher level as the goalkeepers listed above. His confidence brings so much to his game as well as others around him. He has bravery – to come out and put his body on the line for the good of the team. He has a great personality – one which shows his love of playing football – something which is rarely seen in modern football, with pressure often getting to players. And most importantly, he is reliable. His defenders know that he can catch the ball from crosses with conviction, and his reactions are second to none.

This can only mean good things for his team-mates. His defenders know how good he is, which gives them the confidence to push further forward, which, in turn, makes the midfielders push further forward, which helps to pressurise the opposition higher up the pitch. The defenders know that they can trust Hart. He lifts pressure off of his team-mates, which then helps them to play with more freedom.

Before Hart, the players couldn’t do that. David James was known for his great reactions, but unfortunately, his erratic behaviour and often poor decision making too. This meant the players were always cautious and worried that a mistake could happen at any time, and they simply couldn’t trust him.

The good thing is, that not only do the players trust Hart, but the manager, Capello, does as well.

“Roberto Mancini has chosen him for Manchester City and I have chosen him for the England team. He improved a lot last year when he played at Birmingham. That was really important. The two keepers we had who stayed with us [including Ben Foster] are in really good form.”

England have struggled with goalkeepers for a while, with the last consistently good one in David Seaman. Have England found a long term successor? Is he a player who has the confidence and the right amount of arrogance to handle the pressure of being England Number One? Yes. And he’s only 23.