Liverpool get back to Premier League action as the visit the Stadium of Light on Sunday afternoon. Here is my predicted Liverpool starting eleven for the game.

Liverpool get back to Premier League action as the visit the Stadium of Light on Sunday afternoon.

Brendan Rodgers played a virtually full-strength side during their midweek loss to Man Utd and he’s unlikely to make too many changes for the trip to Sunderland.

The game at Old Trafford saw Luis Suarez make his long-awaited comeback after completing his 10-match ban. The Uruguayan put in a lively display and is expected to retain his place in support of Daniel Sturridge up front.

With Philippe Coutinho on the sidelines, Victor Moses and Jordan Henderson are likely to start with Steven Gerrard and Lucas Leiva continuing in midfield.

It’s at the back where there is some uncertainty for Liverpool. Rodgers played a back 3 at Old Trafford but we could see him revert to a traditional back four this weekend, but the personal is unlikely to change too much irrespective of the formation used.

Daniel Agger is still a doubt with a rib injury so we could see Martin Skrtel partnered by Mamadou Sakho in the centre of defence with Kolo Toure playing at right back in the absence of Glen Johnson. Should Rodgers continue with his back three, we’ll see Skrtel, Sahko and Toure play at the back with Enrique and Henderson used as ‘wing-backs’. 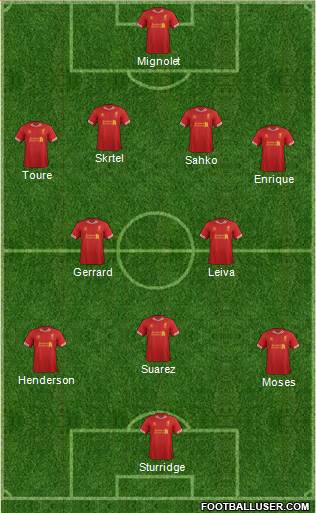