Manchester United will look to put their domestic problems behind them when they take on Shakhtar Donetsk in the Champions League tonight. Here a predicted team

Manchester United will look to put their domestic problems behind them when they take on Shakhtar Donetsk in the Champions League tonight.

David Moyes is expected to make some changes from the side that slumped to a shock 2-1 defeat to West Brom on Saturday, which saw the champions drop to 12th in the Premier League table.

Striker Robin van Persie came on as a second half substitute at Old Trafford after recovering from a groin strain and is expected to be recalled to the starting line-up tonight with Javier Hernandez dropping out.

Moyes is also likely to recall Nemanja Vidic, Patrice Evra and Rafael after the trio were rested against the Baggies. Rio Ferdinand has been left back at home nursing a minor groin injury so Jonny Evans should continue in defence.

Marouane Fellaini was also left out at the weekend so should expect to start alongside Michael Carrick in midfield, while Danny Welbeck could make a return on the left with Shinji Kagawa withdrawn at half time on Saturday.

Anderson, Fabio and Wilfried Zaha have not travelled with the squad to Ukraine. Here’s the line-up I predict will take to the field tonight. 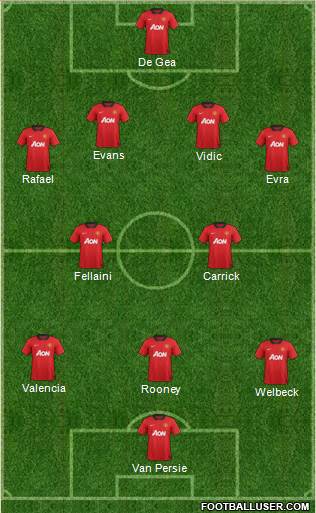