Manchester United get back to Premier League action on Saturday after a hard fought 1-1 draw against Shakhtar Donetsk on Wednesday. Here’s a predicted team.

Manchester United get back to Premier League action on Saturday after a hard fought 1-1 draw against Shakhtar Donetsk on Wednesday night.

David Moyes will be desperate to get back on track after a shock 2-1 defeat to West Brom last weekend and he’ll have the perfect opportunity to do so against manager-less Sunderland, who sit bottom of the table with just 1 point.

Moyes made nine changes in midweek and may stick with the same back four that performed well against the Ukrainian’s in midweek. Rio Ferdinand missed the game with a knock so may find himself on the sidelines again on Saturday.

Wayne Rooney also missed the Shakhtar clash with a minor shin injury but he’s expected to be recalled while Shinji Kagawa may get a start on the left in place of Danny Welbeck. Robin van Persie made his first start in four games last time out after recovering from a groin problem, and he’s expected to start after coming through the game unscathed.

Here’s the starting line-up that Moyes may opt for: 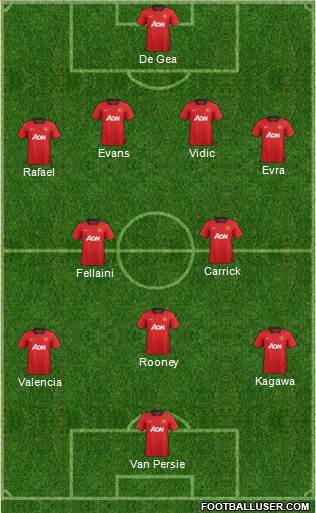 What do you think of the team? What would be your line-up?