The Gunners head into the game sitting top of Group F having recorded wins over Marseille and Napoli so another win tomorrow over last years losing finalists will see the north Londoners move to within touching distance of the knockout stages.

Arsene Wenger confirmed earlier today that midfielder Mathieu Flamini will miss the game due to concussion. The Frenchman was forced off against Norwich on Saturday after a nasty clash of heads and will therefore miss the game after doctors advised he shouldn’t play.

Flamini’s absence will see Aaron Ramsey restored to the starting eleven and the Welshman will take his place alongside Mikel Arteta in midfield. Jack Wilshere is likely to retain his place after scoring a sensational goal at the weekend but Santi Cazorla may find himself among the substitutes with Wenger hinting earlier he might make a couple of changes.

The Spaniard only just returned from a six week absence and is still not 100% match fit so Tomas Rosicky may get the nod tomorrow. Otherwise, we expect much the same team that started against Norwich with the back four settled and Olivier Giroud playing well up front.

Here’s the team Wenger may go with: 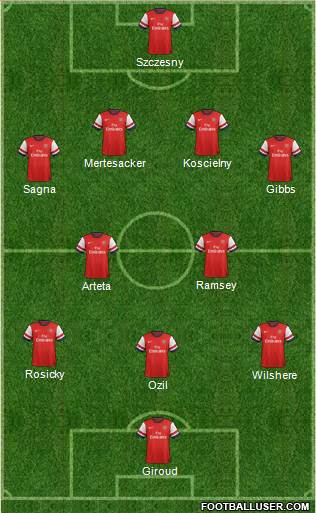 What do you think of the team? What would be your line-up? Share your suggestions below.