Manchester United take on Real Sociedad on Wednesday looking to go one step closer to securing qualification to the knockout stages. Here’s a predicted team.

Manchester United take on Real Sociedad at Old Trafford on Wednesday night looking to go one step closer to securing qualification to the knockout stages of the Champions League.

The Red Devils head into the game sitting top of Group A on goal difference with four points from their opening two fixtures so can move closer to that 10 point mark with a win tomorrow.

David Moyes is set to be without his first choice defensive pairing with both Rio Ferdinand and Nemanja Vidic struggling with injury. The duo missed Saturday’s 1-1 draw with Southampton and were unable to train on Tuesday so are major doubts to take part tomorrow.

This means that Phil Jones and Jonny Evans are likely to continue at the back with Rafael and Patrice Evra expected to make up the back four.

Danny Welbeck could be recalled in place of teenager Adnan Januzaj with Moyes going for more experience in this big European tie, while Antonio Valencia may get the nod over Nani on the right side of midfield.

Wayne Rooney is expected to once again start in support of Robin van Persie up front. Here’s the line-up Moyes might go with: 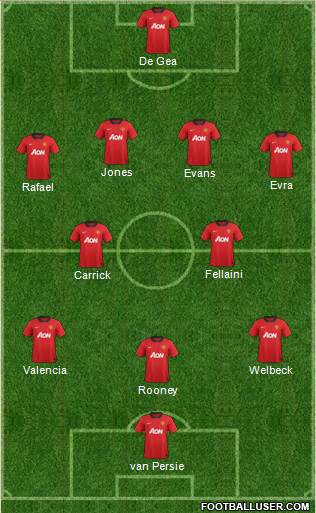 What do you think our our line-up? Do you agree? What would yours be?