Manchester United play host to Stoke City at Old Trafford on Saturday afternoon looking to climb their way up the Premier League table.

The defending champions head into the weekend action sitting eighth and a full eight points off leaders Arsenal, so know victory on Saturday is vital if they are to maintain any hope of keeping their title.

David Moyes men were held to a 1-1 draw by Southampton last weekend but bounced back with a 1-0 win over Real Sociedad in the Champions League on Wednesday night, so will be looking to keep up the momentum tomorrow.

However, Stoke boss and former United striker Mark Hughes believes his side will play the Red Devils at a good time and will be looking to pull off a shock result.

In order to do so Stoke will have to start finding the back of the net with the Potters failing to record a goal in their last three outings, while they have lost their previous five games against United.

Moyes has suggested that striker Robin van Persie will return after missing the midweek win over Sociedad due to niggling toe and groin injuries, and the Dutchman is set to take his place alongside Wayne Rooney in attack.

Midfielders Marouane Fellaini and Adnan Januzaj are also expected to be recalled while captain Nemanja Vidic could make a return at the heart of defence after recovering from injury.

Antonio Valencia, Nani and Ashley Young are all vying for starts and Shinji Kagawa will be hoping to retain his place after a decent outing in midweek.

However, Danny Welbeck and Tom Cleverley are certain to miss out after failing to overcome knocks.

Stoke are likely to be without key defender Ryan Shawcross with the centre-back missing training all week through illness.

Geoff Cameron is also a major doubt having picked up a calf injury during last weeks draw with West Brom, while Kenwyne Jones is pushing for a recall up front. 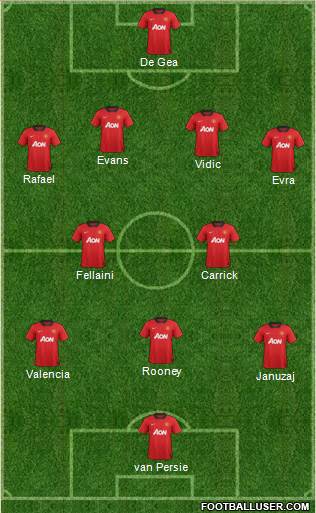 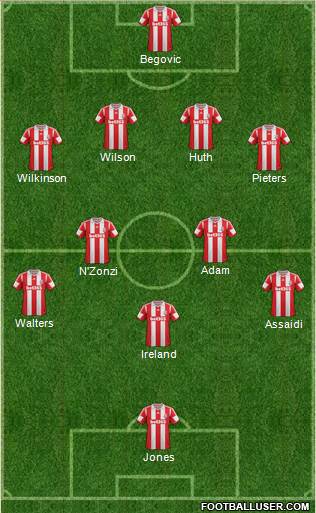 Wayne Rooney: The England ace is edging his way back to something like his best form and we can see him playing a key role in this game.

Man Utd 2-0 Stoke: United have an excellent record against the Potters and with Hughes’ men struggling in front of goal, we predict a relatively comfortable win for the champions.