Chelsea travel north to take on Newcastle United at St James’ Park in Saturday’s early kick-off with the Blues looking to climb to the top of the Premier League.

The West Londoners head into the weekend action sitting two points behind Arsenal so can leapfrog their rivals with a win over Newcastle ahead of the Gunners clash with Liverpool later in the day.

Jose Mourinho made wholesale changes to his starting eleven for Tuesday’s 2-0 win over Arsenal in the Capital One Cup so we should see a number of first team regulars return to action against the Magpies.

Petr Cech, John Terry, Ashley Cole and Branislav Ivanovic should all come back in while Gary Cahill may keep his place in defence ahead of David Luiz.

Ramires and Frank Lampard are also expected to start in midfield while Eden Hazard and Oscar should come in to the attack having been rested in midweek. Juan Mata may retain his place after a superb showing against the Gunners while Fernando Torres is expected to come back in to replace Samuel Eto’o up front.

Here’s the starting eleven Jose Mourinho could go with: 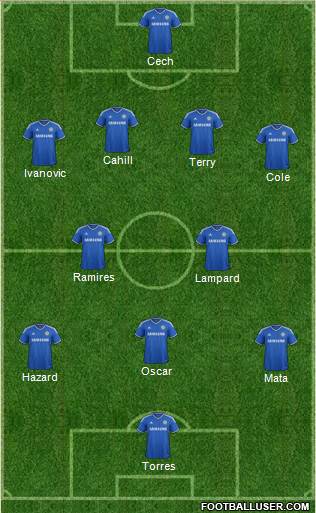