Team of the Weekend: Man Utd Back in the Title Race; Liverpool Smash Fulham

Man Utd and Liverpool take the plaudits on another fascinating weekend of Premier League football. Here is the Football-Talk Team of the Weekend. Do you agree?

With all of their closest rivals dropping points, Gameweek 11 belonged to both Liverpool and, more interestingly, Manchester United; the current champions, and arguably sleeping giants so far this season.

It was a monumental step for United on Sunday, as they defeated current leaders Arsenal, 1-0 at Old Trafford. It was a hard fought, chess-like encounter, with chances few and far between; and it was Robin Van Persie’s first half header that ensured all three points went to the Red Devils.

Liverpool saw off a flailing Fulham 4-0, with Luis Suarez amongst the goals once more, as the Anfield outfit closed the gap on Arsenal to just two points. Newcastle keeper, Tim Krul was a man-possessed at White Hart Lane, keeping Spurs at bay almost singlehandedly, earning his side an unlikely 1-0 win.

Manchester City’s troubles on the road continued, with a 1-0 defeat to lowly Sunderland the latest in a string of damaging away losses for Manuel Pellegrini’s side.

Chelsea boss Jose Mourinho came mighty close to losing his astounding Premier League undefeated home record against West Brom on Saturday. Were it not for a contentious penalty given in stoppage time, converted by Eden Hazard, the Portuguese would have had to have bid farewell to an unbeaten run stretching back to the very start of his first spell in charge.

Here is the ‘Football-Talk’ Team of the Weekend for Gameweek 11:

As I cannot throw Newcastle’s Krul in, due to my ‘Big-Six’ limitations, I must therefore plump for United’s young Spanish goalie, despite a low-key performance in the 1-0 win over Arsenal.

De Gea did not have much to contend with during the match, with the Gunners kept at arm’s length by his adept defence. He was however, committed and commanding throughout, and dealt with anything that did creep through to him consummately. A clean sheet and three crucial points taken.

United’s left sided stalwart, Evra, was in ‘all-action mode’ against Arsenal on Sunday. Flying up and down the wing throughout, a match day commentator noted that the United players seemed not to look when spraying the ball out left, as they were sure the dependable Frenchman would be there!

He and the rest of the United defence contained the threat of Arsenal’s attack, and laid the perfect foundations for RVP to snatch the winner.

Liverpool’s reinvigorated Slovak finds himself in the Team of the Weekend once more after a solid display against Fulham on Saturday, capped off by a superbly taken header in the first half.

Striding away from the intentions of a static Fulham defence, Skrtel met Gerrard’s corner with aplomb; thumping it into the near corner, giving Liverpool a 2-0 lead, and the confidence to stride forward for more.

Utd’s young ‘Captain Fantastic’ had a super game against Arsenal, leading by example, dominating first the midfield, and then the defence in the 1-0 win.

Having successfully quelled the lively Gunners’ attacking midfielders in the first half, Jones was moved back into the heart of the United defence after the injury to Vidic. This shift did not diminish the young England man’s passion and aggression, and he continued the big Serb’s fine work with a consummate defensive display. A real gem.

Of all the members of the United defence on Sunday, I was most impressed with the efforts of Smalling. Stuck wide right, far from his ideal position, he handled himself superbly, both in attack and in defence.

His height was a real advantage against an Arsenal attack full of creative, smaller players; and he exuded a real physical presence throughout. He is obviously not so comfortable in advanced positions, but he was a steady assistant in many of United’s attacking forays. An excellent showing.

Liverpool’s omnipresent ‘beacon’, Gerrard, was at the forefront of most of his side’s best moves against Fulham. He provided three assists, two of which were superb set-pieces, and was an experienced influence on Liverpool’s exciting, devastating attack.

The Anfield outfit have a real shot at a Champions League place this season if they can keep things going.

The wiry Brazilian’s first Premier League start since September was a very good one, as his trickery and guile had the Liverpool fans purring with glee. Unlucky not to score himself with a couple of explosive efforts, Coutinho showed astute vision, and a calm head under pressure.

His presence adds even more firepower to an already deadly Liverpool strike force.

The solitary Chelsea man in my thoughts this weekend, Hazard was integral to the Blues avoiding a shocking defeat at the hands of West Brom at Stamford Bridge.

His first half effort stung the hands of Boaz Myhill, and Samuel Eto’o was on hand to stab in the opening goal on the rebound. With Steve Clarke’s side taking an unlikely lead in the second half, it was down to Hazard to rescue his side from the spot at the very end of the game. The Belgian was calmness personified as he rolled the ball into the corner, sending the Blues faithful home very relieved!

RVP was back to haunt his former side this weekend with the goal that not only defeated the Gunners, but put his United side right back into the mix for the title.

The former Arsenal man leapt highest to meet Wayne Rooney’s in-swinging corner, with the ball evading a despairing Kieran Gibbs on the line, to nestle in the far corner. The Dutchman celebrated unashamedly, rubbing salt into the fresh Arsenal wound. It was to be enough as Utd saw the game out in comfortable circumstances, giving them a real boost going into the international break.

Being only allowed to play in the game on Saturday by his Uruguayan national setup because of Liverpool’s willingness to hire a private jet to fly him out for the international break, Suarez proved once more that he is more than worth the extra hassle!

With another couple of goals to his name, Suarez is in red hot form right now. Fulham just couldn’t cope with the striker, as many defences have found this season, and he is leading his side into a very interesting footballing future.

The sixth United player to grace this list, Rooney is arguably the pick of the bunch after another sensational display of passion, drive and determination.

Not only did the England man send in the corner for the RVP goal, Rooney never stopped running; shadowing the besieged Arsenal backline, pinging inch perfect balls around the park, and proving once more that his is every bit behind the United cause, despite an unsettled summer of discontent. 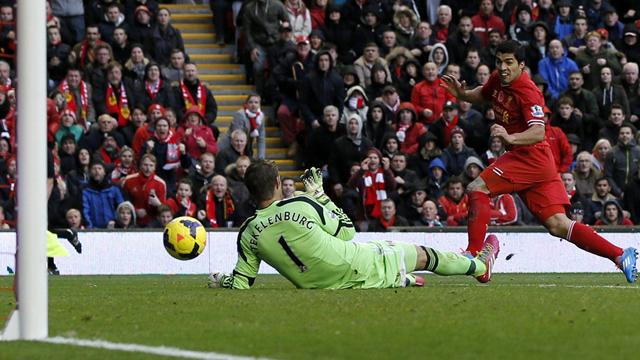 What do we think? Can Utd go on to win the league after this impressive win? Will Liverpool’s attacking-minded play carry them to glory? Let me know in the comments below!