Manchester United travel to Wales on Sunday afternoon to take on newly-promoted Cardiff City looking to close the gap at the top of the Premier League.

United head into the weekend action sitting fifth in the table following a 1-0 win over Arsenal before the international break and are now just five points off the pace.

Boss David Moyes will have to make do without the services of Michael Carrick after the midfielder was ruled out for up to six weeks with an Achilles injury. Marouane Fellaini or Tom Cleverely are likely to come in while the evergreen Ryan Giggs is expected to start against his boyhood club for the first time in his illustrious career.

Phil Jones is also out with a groin problem while Nemanja Vidic is expected to start after being given a week off following concussion against Arsenal last time out.

Robin van Persie missed Holland’s friendlies with niggling toe and groin injuries. However, Moyes is likely to start the striker as he’s had two weeks to recuperate.

Antonio Valencia, Nani, Ashley Young and Adnan Januzaj are all vying for starting spots on the wings, while Wayne Rooney will support RVP in attack.

Here’s our predicted Man Utd starting line-up for the game: 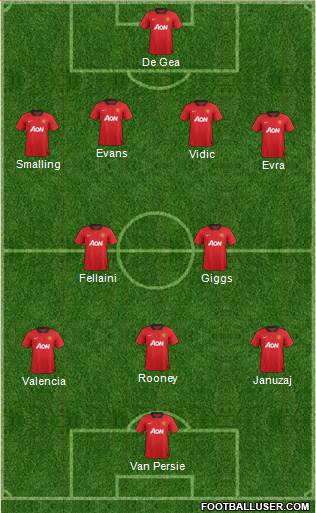 What do you think of our team? What would your be? Share your suggestions below.