Manchester United entertain Everton on Wednesday night looking to close the gap at the top of the Premier League. Here is the team Moyes could go with:

Manchester United entertain Everton on Wednesday night looking to close the gap at the top of the Premier League.

The game will see David Moyes come up against the Toffees for the first time since leaving Goodison Park to replace Sir Alex Ferguson at Old Trafford in the summer, and he’ll be hoping to put one over his former side to thrust United back in to the title race.

However, Moyes must do it without the services of Phil Jones after he picked up his fifth booking of the season against Tottenham on Sunday. His suspension along with the continued absence of Michael Carrick to injury means Marouane Fellaini could come in to face his former side for the first time since leaving on transfer deadline day.

Robin van Persie missed the weekend’s 2-2 draw at White Hart Lane but Moyes has confirmed the Dutchman ‘has a chance’ of featuring tomorrow night.

Shinji Kagawa and Danny Welbeck will be hoping to retain their places but the Japanese star may get the nod after a couple of impressive displays in recent weeks.  Rafael, Nani, Ashley Young and Rio Ferdinand are among those pushing for recalls. 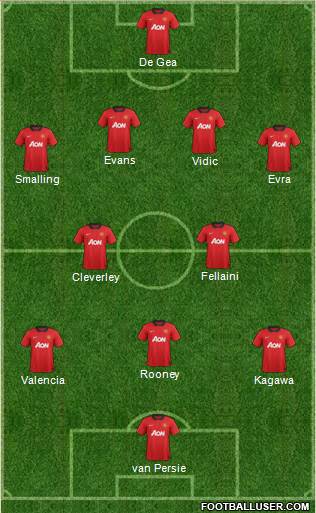