Man Utd finish off the group stages of the Champions League on Tuesday when they entertain Shakhtar Donetsk at Old Trafford. Here’s a predicted line-up.

Manchester United finish off the group stages of the Champions League on Tuesday night when they entertain Shakhtar Donetsk at Old Trafford.

The Red Devils have already secured qualification to the knock out stages of the competition but they will be keen to avoid defeat to ensure they finish top of Group A and hopefully get a more favourable draw in the next phase.

David Moyes will be looking to get back on track following two disappointing home defeats to Everton and Newcastle and this may play a part in his team selection with the United boss probably picking a stronger side than he may otherwise have gone with.

Nemanja Vidic, Marouane Fellaini and Patrice Evra all missed training on Monday so are likely to miss out giving the likes of Alexander Buttner an opportunity to impress.

Ryan Giggs may be drafted in to midfield to add some experience while Danny Welbeck and Antonia Valencia may be recalled having been left out at the weekend. Shinji Kagawa was back in training on Monday after missing the weekend action through sickness and the Japanese playmaker could come straight back in.

Wayne Rooney is also likely to return having served a one-match ban on Saturday but Robin van Persie could be rested having only just returned from a month out injured. 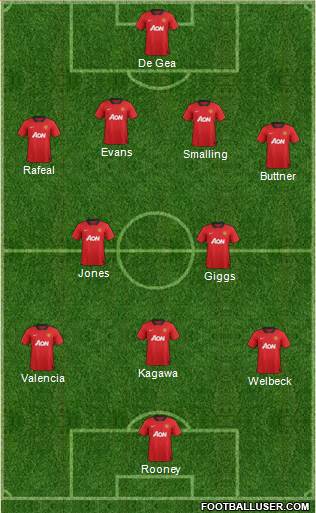