The Blues are already safely through to the knockout stages but will want to see-off the Romanians to ensure they finish above either Basel or Schalke.

Jose Mourinho has confirmed he’ll make some changes from the team that lost 3-2 to Stoke City on Saturday. One man who is certain to start is veteran defender Ashley Cole, with the 32-year-old set to play his first game in over a month at left-back.

David Luiz trained on Tuesday so is likely to be recalled giving John Terry a well-earned rest, while Frank Lampard could come back in alongside Ramires in midfield.

Oscar also trained on Tuesday but may only return to the bench with Juan Mata and Edena Hazard continuing in attack, while Willian is likely to be given a chance to impress with Andre Schurrle given a breather following his two-goal display at the weekend.

Fernando Torres is almost certainly going to make way up front with Demba Ba and Samuel Eto’o vying for the lone striker role. Here’s the team Mourinho could go with: 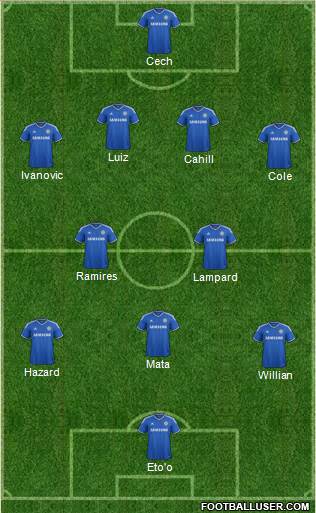 What do you think of our team? What would be your XI? Share your views below.