Manchester United entertain West Ham at Old Trafford on Saturday afternoon looking to close in on the top four. Here is our predicted starting eleven.

Manchester United entertain West Ham at Old Trafford on Saturday afternoon looking to close in on the top four.

Both sides enjoyed successful outings in the Capital One Cup in midweek, with United easing past Stoke 2-0 while the Hammers came from behind to beat Spurs 2-1 at White Hart Lane.

Wayne Rooney missed United’s trip to the Britannia with a groin injury but David Moyes confirmed yesterday that the striker has a chance of featuring this weekend. Should Rooney miss out, we’d expect Javier Hernandez to partner Danny Welbeck in attack with Robin van Persie still out with a thigh injury.

Nemanja Vidic remains a doubt after missing the last three games through injury so Chris Smalling could continue alongside Jonny Evans at the back with Phil Jones keeping his place in the centre of midfield with Tom Cleverley.

Shinji Kagawa could come back in having returned to the bench in midweek, while Antonio Valencia should retain his place on the right wing. 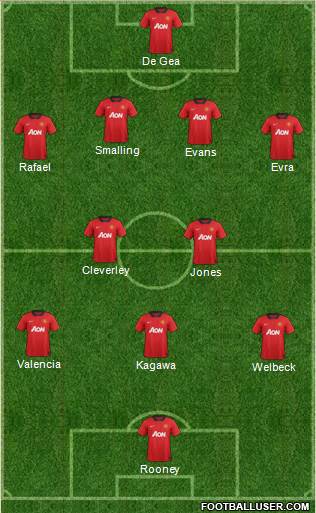 What do you think of our team? What would your team be? Share your views below.