Manchester United get back to domestic matters when they visit Newcastle United on Saturday afternoon. Here’s our predicted starting line-up for the game.

Manchester United get back to Barclays Premier League action when they visit Newcastle United on Saturday afternoon. Here’s our predicted starting line-up for the game.

United produced an excellent performance to hold European champions Bayern Munich to a 1-1 draw on Tuesday night but David Moyes is expected to freshen things up ahead of Wednesday’s second leg in Germany.

Rafael missed the game in midweek after picking up a hamstring injury last Saturday so Chris Smalling – who returned to training last week – could come back in to deputise at right-back allowing Phil Jones to move in to the middle of defence.

Patrice Evra was suspended on Tuesday so should come back in for Alex Buttner at left-back while Darren Fletcher may be given a start in midfield in place of Marouane Fellaini – who was widely criticised for his performance against Bayern.

Juan Mata was ineligible to face the reigning Champions League holders but is almost certain to start in the ‘hole’, while Shinji Kagawa may have played himself back into the starting eleven after an impressive second half shift last time out.

Robin van Persie is still on the sidelines with a knee injury so Wayne Rooney will continue up front, while Antonio Valencia may keep the right-wing slot ahead of Ashley Young.

Here’s the side we think Moyes will pick: 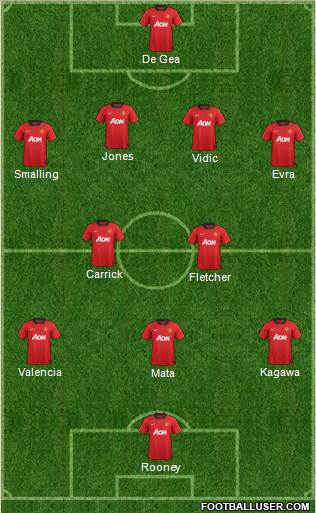 What do you think of our team? What side would you pick for the game? Share your views below.