Manchester United kick off the post David Moyes era when they entertain Norwich City at Old Trafford on Saturday evening. Here’s our predicted team for the game

Manchester United kick off the post David Moyes era when they entertain Norwich City at Old Trafford on Saturday evening. Here’s our predicted team for the game.

Veteran midfielder Ryan Giggs has been put in charge of United’s last four games of the season and one of the first things he did after being installed as caretaker was to bring former team mate Paul Scholes back to the club as a coach.

The Welshman will be keen to get off to a positive start but is unlikely to change too much other than try and instil more confidence in the players and improve morale in the squad after a disappointing campaign.

Patrice Evra is still struggling with a knee problem so Alex Buttner should retain his place at left-back while Jonny Evans could come in for Phil Jones after his poor performance against Everton last weekend. Rafael is also still struggling with injury so Chris Smalling is likely to continue at right-back.

The big question is whether Giggs will pick himself in midfield but we feel he’ll take a modest approach and concentrate on managing the team, which is likely to see Michael Carrick and Darren Fletcher start in the middle of the park.

Danny Welbeck and Antonio Valencia are expected to come in on the wings while Juan Mata should support Wayne Rooney in attack with Robin van Persie still out with a knee injury.

Here’s the eleven we think Giggsy will go with this weekend: 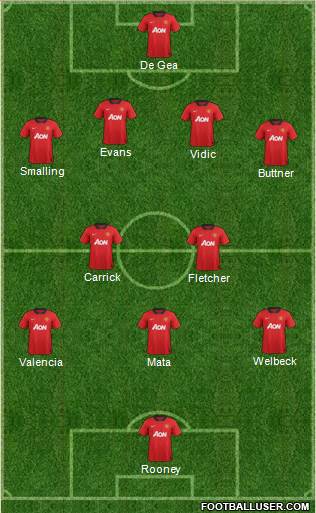 What do you think of our team? What side would you select? Share your views below.