Chelsea, Liverpool, Arsenal and Man Utd are at home this weekend and we’ve had it confirmed by the Premier League which referees will be in charge of their games

Chelsea, Liverpool, Arsenal and Man Utd are all at home this weekend and we’ve now had it confirmed by the Premier League which referees will be in charge of their fixtures.

Arsenal welcome Premier League champions Manchester City to the Emirates on Saturday lunchtime for this weekends stand-out game and Mark Clattenburg has been selected as the man to take charge of proceedings.

It will be a top-of-the-table affair at Stamford Bridge as Chelsea take on Swansea City and Kevin Friend will be the man in the middle this time as the only two clubs with 100% records so far go head-to-head in West London.

Tottenham Hotspur will be hoping to get back to winning ways after a disappointing loss at home to Liverpool just before the international break when they take on Sunderland at the Stadium of Light, and Craig Pawson will be the man in charge.

The other big game on Saturday sees Liverpool take on Aston Villa at Anfield and Lee Mason has been chosen as the referee to oversee things, while Phil Dowd will be at the center of things at Old Trafford on Sunday when Manchester United entertain Queens Park Rangers.

Here is a full list of the referee appointments and their assistants for match-week 4 of the Premier League: 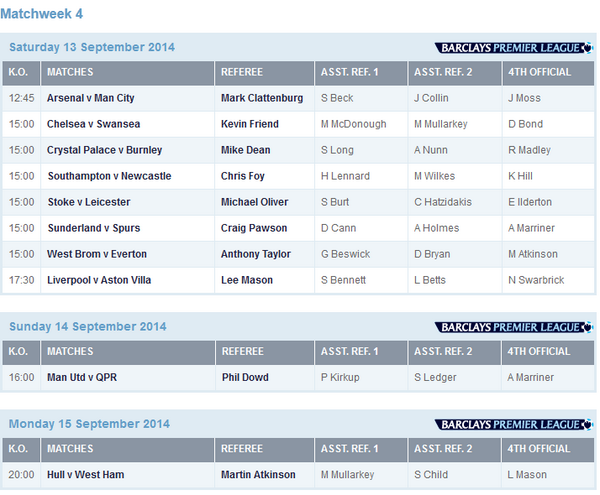