Liverpool + Man Utd Set To Do Battle Over Brazilian International

Liverpool and Man United are lining-up surprise moves for Barcelona defender Dani Alves if he fails to sign a new deal at the Nou Camp , according to reports.

The summer transfer window may be closed but managers are already thinking ahead to future transfer windows so we’ll bring you all the latest news and gossip. Today, Liverpool and Manchester United are linked with Dani Alves. 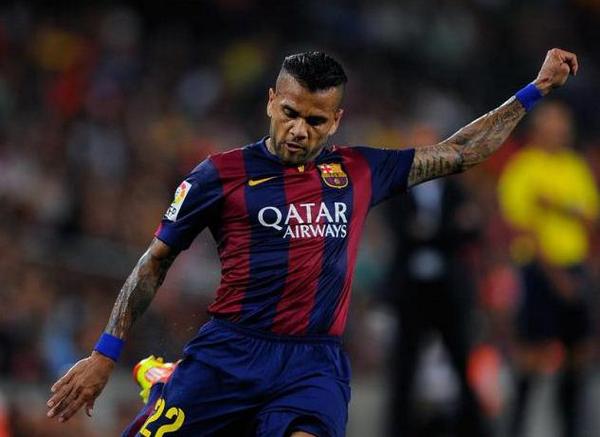 Liverpool and Manchester United are lining-up surprise moves for Barcelona defender Dani Alves if he fails to sign a new deal at the Nou Camp , according to reports.

Alves was strongly linked with a move away from Barcelona this summer with Paris Saint-Germain understood to have held lengthy talks about taking him to Ligue 1.

However, the French giants were unable to agree a deal and the 31-year-old has been forced to stay with the Catalans where his first team place is under threat from Martin Montoya and new signing Douglas.

The Brazilian international has just entered the final year of his contract and as the La Liga club open to selling him this summer, it seems he’s not in Luis Enrique’s long-term plans so there’s no guarantee he’ll sign an extension any time soon.

Unless he pens a new deal in the coming weeks, Alves will be free to hold talks with foreign clubs about a free transfer move at the end of the season and the Express claim that Liverpool and Manchester United have emerged as surprise suitors.

The newspaper suggests that both Brendan Rodgers and Louis van Gaal are keen on bringing the Samba Star to the Premier League on a short-term deal, but they are likely to face competition from the likes of PSG and Inter Milan.

Alves would certainly offer the kind of attacking threat van Gaal will be looking for from his right wing-back in his new 3-5-2 formation at Old Trafford and would push compatriot Rafael for a first team place.

However, it appears United will have to fend off interest from rivals Liverpool and Rodgers could be eyeing the former Sevilla ace as a potential replacement for Glen Johnson, with rumours suggesting the England international could be leaving when his contract expires next summer.