Liverpool will look to put a disappointing weekend behind them when they take on Middlesbrough in the Capital One Cup tomorrow night. Here are predicted team

Liverpool will look to put a disappointing weekend behind them when they take on Middlesbrough in the Capital One Cup tomorrow night. Here is the team we think Brendan Rodgers will select.

Goalkeeper: Rodgers is likely to take the opportunity to give back-up goalkeeper Brad Jones a run-out with Simon Mignolet rested.

Defence: With Glen Johnson and Jon Flanagan injured, Javier Manquillo is likely to keep his place at right-back but otherwise Rodgers could make changes in defence with Kolo Toure and Mamadou Sakho coming in. Jose Enrique could also be handed his first start of the season at left-back after recovering from a serious knee injury.

Midfield: Captain Steven Gerrard is expected to be given a well-earned rest. With Emre Can and Joe Allen out injured, Rodgers may be forced to go with Lucas Leiva alongside Jordan Henderson with Philippe Coutinho likely to get a recall after being left-out against the Hammers.

Attack: Rickie Lambert is likely to be given the nod up front with Mario Balotelli rested and Daniel Sturridge out. Lazar Markovic and Adam Lallana are expected to be recalled with Fabio Borini dropping out and Raheem Sterling rested.

This is how Rodgers could line-up tomorrow: 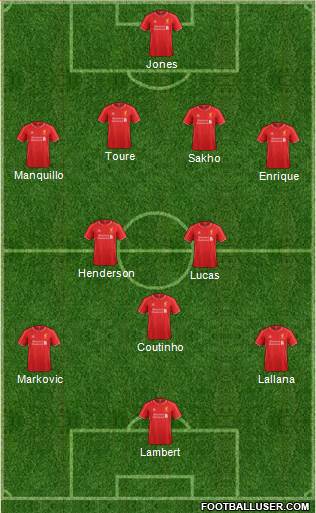 What do you think of the team? What eleven would you go with?