Arsenal are back in Champions League action tonight when we take on Anderlecht in Brussels. Here’s a preview with team news, likely line-up and prediction

Arsenal are back in Champions League action tonight when we take on Anderlecht in Brussels.

We head into the game sitting second in Group D – three points behind leaders Borussia Dortmund – after our 4-1 win over Galatasaray three weeks ago.

The Match Day one defeat to the Germans means we face an uphill fight to finish top, but victory over Anderlecht this evening will go a long way to ensuring we qualify for the knockout stages.

The Belgians have finished bottom in all seven group stage campaigns since they reached the last 16 in 2001, and they opened up this years campaign with an impressive draw at Galatasaray before being thrashed 3-0 by Dortmund.

This is definitely our most winnable away game so it’s vital we come back to London with a positive result, but we’ll have to play better than we did in the second half against Hull on Saturday as we were extremely poor during the 2-2 draw.

The big team news is that third-choice goalkeeper Emiliano Martinez is set to start in place of the suspended Wojciech Szczesny following his sending off against Galatasaray.

David Ospina is unable to step in as he’s been ruled out for at least two months with a thigh injury. 17-year-old rookie Ryan Huddart is in line for a place among the subs to act as back-up for Martinez.

Jack Wilshere trained on Tuesday despite being forced off against Hull with a knee injury, and with him being suspended for Saturday’s trip to Sunderland, he’s expected to start tonight.

Aaron Ramsey is also in line to start having made a successful return from injury last time out while Mikel Arteta could come back in for Mathieu Flamini.

Calum Chambers returns from suspension and is expected to start alongside Per Mertesacker as Laurent Koscielny is still out with an Achilles problem.

Theo Walcott played for the under-21’s on Friday but hasn’t travelled to Belgium, so he joins Mesut Ozil, Mathieu Debuchy and Olivier Giroud on the sidelines. 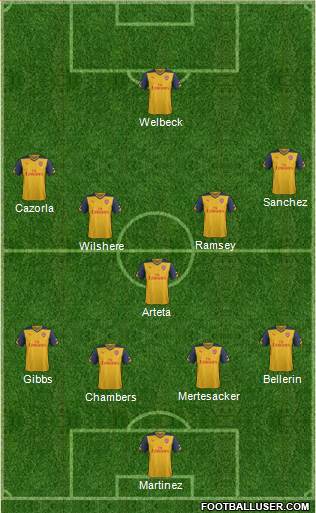 Alexis Sanchez: The Chilean international has been in superb form of late and was the stand-out player once again during our 2-2 draw with Hull on Saturday, scoring a fine opener before setting up a late equaliser. With Ozil out, we’ll need Sanchez on top form tonight.

Anderlecht 1-3 Arsenal: Despite our injury worries we can still put out a side more than capable of winning tonight and I think we’ll come home with a vital win.