Man Utd have announced that former Barcelona keeper Victor Valdes is set to continue his rehabilitation at the club before training with the first team squad.

The summer transfer window may be closed but managers are already thinking ahead to future transfer windows so we’ll bring you all the latest news and gossip. Today, former Barcelona goalkeeper and Liverpool target Victor Valdes is set to train with Man Utd. 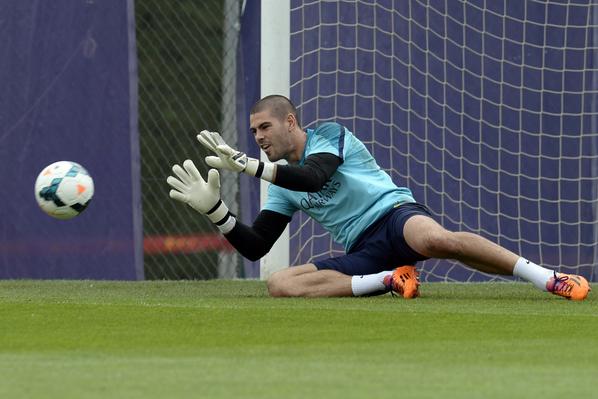 Manchester United have announced this evening that former Barcelona goalkeeper Victor Valdes is set to continue his rehabilitation at the club before training with the first team squad.

Valdes became a free agent in the summer when his contract at Barcelona expired and he had agreed a deal in principal to join Ligue 1 side Monaco until the deal collapsed due to concerns over the keepers knee injury.

The 32-year-old tore the anterior cruciate ligament in his right knee during Barca’s 3-0 win over Celta Vigo back on March 26 after landing awkwardly while saving a free-kick, and subsequently underwent surgery which ruled him out for around seven months.

The Spanish international is now coming towards the end of his recovery program but he’s still yet to find a new club, but there has been widespread speculation linking him with a move to Liverpool as Brendan Rodgers looks to bring in competition for Simon Mignolet.

However, in a shock twist, Manchester United have announced on ManUtd.com this evening that Valdes has taken up Louis van Gaal’s offer to continue his rehabilitation at Old Trafford.

The hugely experienced keeper will then train with the United first team as he bids to regain full fitness but it’s not clear whether the former champions intend on making the move permanent or not.

David De Gea is currently United’s No.1 and he’s been in superb form this season so Valdes would likely be his compatriot’s understudy if he does end up joining United on a permanent basis – which wouldn’t be the ideal situation for a player his age.

This news is sure to come as a surprise to Liverpool as they have been hotly tipped to land Valdes on a free transfer over the coming weeks, and it will be interesting to see if Brendan Rodgers maintains his interest now the player has agreed to link-up with United.