Manchester United boss Louis van Gaal has given an update on the fitness of Radamel Falcao and Phil Jones after they missed Sunday’s 1-1 draw against Chelsea. 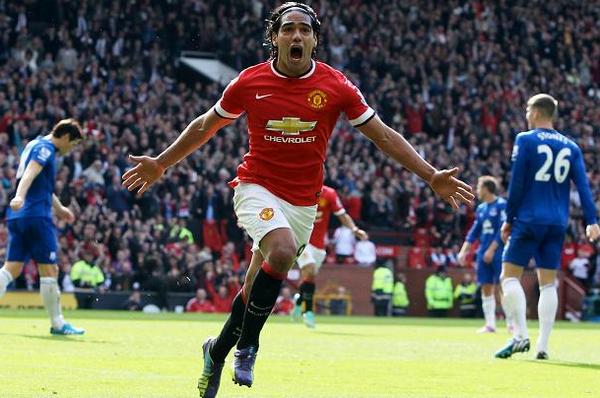 Manchester United boss Louis van Gaal has given an update on the fitness of Radamel Falcao and Phil Jones after the duo were forced to miss Sunday’s 1-1 draw against Chelsea.

Having only come on as a second half substitute during United’s 2-2 draw with West Bromwich Albion last Monday, Falcao was expected to be restored to the starting line-up for Sunday’s big clash with Chelsea at Old Trafford.

However, he was a surprising admission from the match-day squad as Robin van Persie lead the line against the Premier League leaders with the likes of Juan Mata and Angel Di Maria in support up front.

Speaking after an entertaining 1-1 draw, van Gaal told ManUtd.com that the Colombian hitman picked up a knock in training on Thursday and although the injury isn’t thought the be a serious one and he shouldn’t be out for long, it was enough to keep him from facing the Blues yesterday.

“Falcao took a kick in training on Thursday and couldn’t play because of that,” van Gaal told MUTV.

“We’ll have to wait and see, but I don’t think the injury is too bad, today’s match came too soon for him.”

This will come as a huge relief as Falcao looked to be finding his feet in the Premier League following his summer loan move from Monaco and it would have been a blow had the South American been ruled out for any period of time.

But there is more worrying news concerning the fitness of Phil Jones after the defender also sat out of the game on Sunday afternoon. Jones only just made his return from a one-month absence due to a hamstring injury when he completed the full ninety minutes against West Brom last week.

However, it seems that game may have come a little too soon as the 22-year-old has subsequently picked up shin splints and the United boss admitted he has no idea how long the versatile defender will be out for.

“The match against West Brom was his first after a long injury period.

“We brought him back and he trained for more than a week with the first team, then had to play 90 minutes.

“Then he had a sore feeling in his shin. On Saturday he could not continue training, even though it was a very light session before the match.

“He had shin splints, which is very painful. I don’t know how long it will take [for him to recover].” van Gaal is quoted as saying by the Daily Star

It will be a big blow if Jones is now ruled out again as van Gaal has only just started to get his senior defenders fit again after enduring something of an injury crisis at the back during the opening weeks of the season.

Thankfully Chris Smalling is now fit again and came through yesterday’s clash with Chelsea unscathed after more than a month out while Jonny Evans is also edging his way back to full fitness after several weeks on the sidelines with an ankle injury.