Liverpool will look to get back to winning ways when they take on Swansea in the 4th round of the Capital One Cup on Tuesday. Here is our predicted line-up:

Liverpool will look to get back to winning ways when they take on Swansea City in the fourth round of the Capital One Cup on Tuesday night. Here is our predicted line-up:

Goalkeeper: Brendan Rodgers resisted the temptation to play Brad Jones in the last round so he may opt to go with his No.1 Simon Mignolet once again tomorrow.

Defence: Glen Johnson was rested for Saturday’s 0-0 draw with Hull so he could come back in while Jose Enrique should also make another start as he continues to build his match fitness. With Mamadou Sakho still nursing an injury, Rodgers will only be able to rest one of his centre-backs and Martin Skrtel may be the man to keep his place in the back four with Kolo Toure getting a rare start in place of Dejan Lovren.

Midfield: Captain Steven Gerrard is likely to be rested so Jordan Henderson could skipper the side after being left on the bench at the weekend. Lucas Leiva’s last start was against Middlesbrough in the previous round so he could make another appearance with Philippe Coutinho likely to start after being rested against Hull.

Attack: Mario Balotelli is almost certainly going to be given a breather after a torrid few games so Rickie Lambert should get his chance up front. Fabio Borini could get a rare run-out if Rodgers doesn’t want to risk the likes of Raheem Sterling or Adam Lallana, while youngster Lazar Markovic should get a chance to impress in attack. 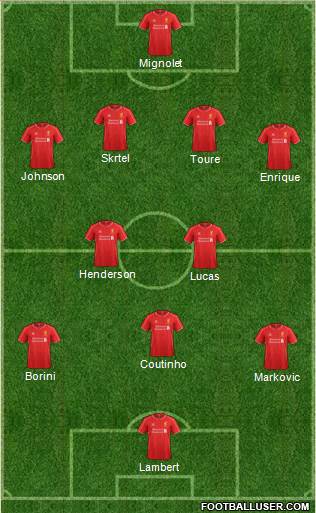