Manchester City have been dealt a huge injury blow ahead of Sunday’s Manchester derby against neighbours United with David Silva ruled out of the game. 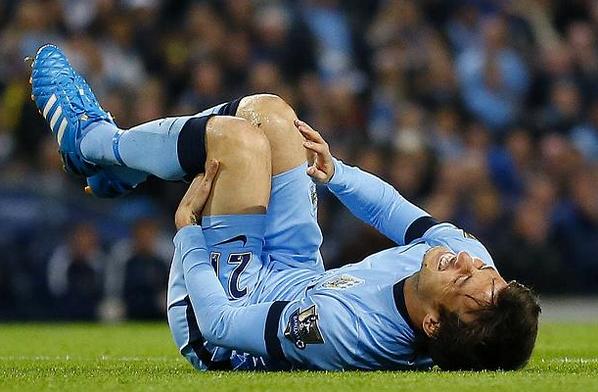 Manchester City have been dealt a huge injury blow ahead of Sunday’s Manchester derby with David Silva ruled out of the game with a knee injury, according to reports today.

Silva was forced off during the opening stages of City’s 2-0 defeat to Newcastle United in the fourth round of the Capital One Cup on Wednesday night after being fouled by Ryan Taylor in the ninth minute.

The Spanish international was subsequently sent for a scan to determine the full extent of the injury and the Mirror claim that following an assessment at the private Alexandra Hospital in Cheadle, near Manchester, it was revealed that Silva has suffered ligament damage to his knee.

It’s not been confirmed exactly how long the attacker will be out for but the newspaper suggests it’s likely to be at least three weeks. Either way, it looks like Silva is certain to miss Sunday’s derby against Manchester United which will come as a huge boost to Louis van Gaal’s men.

No doubt Silva would have been one of the key men the Dutch boss would have been hoping to keep quiet at the Etihad this weekend and it will be a big relief that United wont have to face him as they look for a win that will close the gap on their rivals to just one point.

However, obviously the news will be a big blow to City and Silva’s injury comes at a crucial point of the season where Manuel Pellegrini is finding himself under pressure after a disappointing run of form.

If Silva does miss three weeks, as well as the United game he’ll also sit out Wednesday’s crucial Champions League clash with CSKA Moscow as well as next Saturday’s trip to Queens Park Rangers. He’ll then have two weeks to recover during the international break before City entertain Swansea on the 22nd November and Pellegrini will be desperate for the Spaniard to be available again to help get their title push back on track.