Chelsea will be looking to extend their lead at the top of the table when they take on Hull on Saturday. Here is the side I think Jose Mourinho will select:

Chelsea will be looking to extend their lead at the top of the table when they take on Hull City at Stamford Bridge on Saturday afternoon. Here is the side I think Jose Mourinho will select:

Goalkeeper: Thibaut Courtois is set to be recalled after being rested for the midweek win over Sporting Lisbon. Petr Cech will once again revert back to the bench.

Defence: Mourinho also rested Branislav Ivanovic and John Terry on Wednesday night so the pair will come back in to defence with Kurt Zouma and Filipe Luis dropping out. Gary Cahill and Cesar Azpilicueta will retain their places at the back.

Midfield: Cesc Fabregas is suspended having picked up five yellow cards this season so Ramires could come in to the midfield after making his comeback with a substitute appearance last night. Although Mourinho may opt to stick with John Obi Mikel alongside Nemanja Matic after his goal-scoring display against Lisbon.

Attack: Eden Hazard and Willian were completely rested from the squad on Wednesday so the duo are expected to be brought straight back in to the starting eleven this weekend. Oscar was also a substitute last night so the Brazilian should get a recall with Andre Schurrle and Mohamed Salah missing out. Diego Costa wasn’t at his best last time out but Jose is confident the Spaniard will find his form once he regains full fitness. 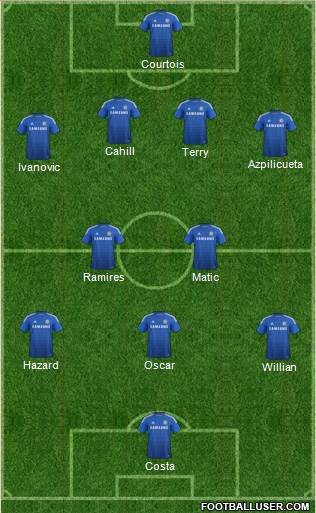