Liverpool will be hoping to avoid an upset when they take on Bournemouth at Dean Court in the Capital One Cup quarter final tonight.

The Merseysiders have endured a difficult few weeks and dropped to eleventh place in the Premier League table following Sunday’s 3-0 defeat by Manchester United at Old Trafford.

Another defeat to lower league opposition would be a major blow to the Liverpool players confidence, which is the last thing they need with a crunch clash with Arsenal coming up on Sunday.

The pressure is mounting on Brendan Rodgers so the Reds boss will be desperate to get back on track tonight by booking their place in the semi finals of the League Cup.

However, Bournemouth come into the game in excellent form with Saturday’s 5-3 win over Cardiff extending their unbeaten run to 12 games which sees Eddie Howe’s men currently sitting top of the Championship table, so they should be confident of pulling off an upset this evening.

Liverpool will be without Mario Balotelli after he aggravated a groin injury against United on Sunday so Rickie Lambert is expected to start up front.

Rodgers has promised not to take the hosts lightly but with Arsenal up next, the Northern Irishman is likely to rest a few key men.

Steven Gerrard and Jordan Henderson could be given a breather with Lucas Leiva and Emre Can starting in midfield, and Raheem Sterling could make way for Lazar Markovic in attack.

Mamadou Sakho and Jose Enrique are set to start at the back while Javier Manquillo should come in at right-back for Glen Johnson – whose been ruled out for a month with a groin injury.

Brad Jones will continue in goal after Rodgers dropped Simon Mignolet for the foreseeable future. 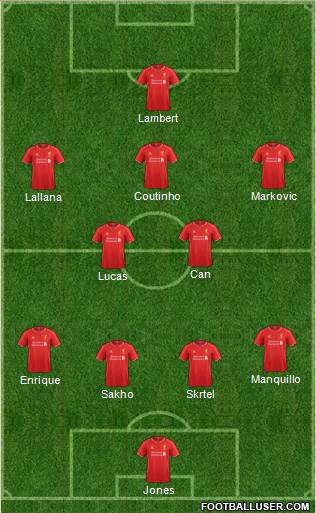 Bournemouth 1-2 Liverpool: The pressure is on Liverpool to stop their season falling apart and despite resting some key players, I think the Reds might just have enough to edge this one. It won’t be easy by any stretch of the imagination, but I’m back Rodgers’ side to progress tonight.

Liverpool are the even money favourites to win tonight but Football-Talk can get you enhanced odds of 6-1 on the Reds to win with Betfair. Lambert looks a decent bet at 6/1 to open the scoring and if we combine that with a 2-1 away win in a scorecast, then we get very tempting odds of 45/1. Surely that’s got to be worth a couple of quid!?