Arsenal let slip two vital points after conceding a 97th minute equaliser against 10-man Liverpool at Anfield on Sunday. Here are player ratings from the game 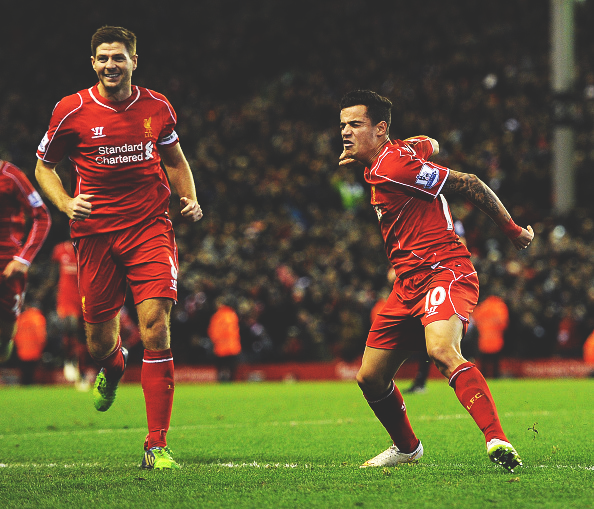 Here are my player ratings:

Jones 6/10 | Might be disappointed that Giroud’s goal went through his legs but was otherwise solid and good with the ball at his feet.

Toure 6/10 | Kept the Arsenal attack quiet for the first half but was poorly positioned for the Gunners second goal.

Skrtel 7.5/10 | On hand to power home the equaliser in the 97th minute and bravely soldiered on after receiving a nasty cut to his head.

Sakho 6.5/10 | Looked a little shaky at times, especially in possession, but is still finding his feet after a lengthy injury absence.

Leiva 6.5/10 | Wasted a couple of half-chances to score but did well to disrupt the Arsenal attack in front of the back-four.

Henderson 7/10 | Worked hard as always and looks to be growing into the wing-back role.

Gerrard 6.5/10 | Superb set piece at the death set-up the equaliser but much of the game passed him by.

Markovic 7/10 | Another encouraging display in the wing-back role and caused Arsenal plenty of problems down the left.

Lallana 7/10 | Was a constant threat but sometime the final ball was lacking.

Coutinho 8/10 | Gave the visitors all sorts of problems, particularly in the first half, when he deservedly put Liverpool ahead. MOTM.

Sterling 6/10 | Didn’t have too much joy through the middle today. His pace made him a threat but little end product.

Borini 5/10 | Ruined a lively introduction by getting himself sent off.

Szczesny 7/10 | Not at fault for either goal and made a couple of vital saves from Borini and Gerrard.

Chambers 5.5/10 | Markovic gave him plenty of problems down his side and didn’t look comfortable all afternoon.

Debuchy 7/10 | On hand to head home the equaliser before half time. Another encouraging display at centre-back from the Frenchman.

Mertesacker 6/10 | Partly at fault for the Skrtel goal as he put the Liverpool man under no pressure.

Gibbs 6.5/10 | Struggled to get forward as much as he would have liked due to the hosts formation. Did well enough against Lallana.

Flamini 5/10 | Lucky to stay on the pitch in the first half. Was all over the place during the opening 45 but improved after the break.

Cazorla 7/10 | Lively display in the second half and set up Giroud for his goal.

Alexis 6/10 | The Chilean will be disappointed with his performance but he still managed to put a shift in.

Giroud 7/10 | Took his goal very well and showed a great touch in the build up.