Arsenal secured a 2-1 win over West Ham on Sunday afternoon thanks to goals from Santi Cazorla and Danny Welbeck. Here, Gunner333 analyses the performance…..

Arsenal secured a hard fought 2-1 win over West Ham on Sunday afternoon thanks to goals from Santi Cazorla and Danny Welbeck. Here, Gunner333 analyses the performance….. 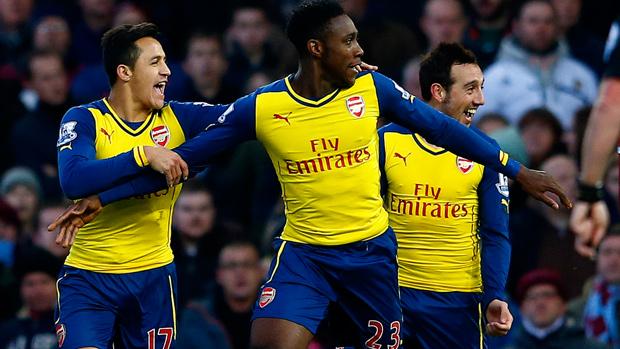 Seeking back-to-back wins, Arsenal travelled to the Boleyn Ground where this season’s surprise package, West Ham, lay in wait.  Wenger made three changes to the Boxing Day victors, bringing in Coquelin for Rosicky, Oxlade-Chaberlain for the suspended Giroud and replacing Gibbs with the returning Laurent Koscielny at centre-half.

The Hammers played the better of the two for the majority of the first period, Cresswell and Downing looking especially dangerous with some quality combinations down the left, but it would though be the Arsenal who would draw first blood, courtesy of form-man Santi Cazorla.

Brought down by Winston Reid inches inside the West Ham penalty area, the midfielder yet again earned and scored an Arsenal spot-kick, sending fellow Spanish counterpart Adrian the opposite way to hand Wenger’s men a surprising lead.

As if one goal before the break was not a big enough blow, the hosts were handed a double-sucker punch, trailing by two moments before the interval. The second involved Santi once again, who linked up brilliantly with the Ox, whose quick-fire cross found English teammate Welbeck to bundle the ball home.

At half-time, the Gunners lead by two despite being exceptionally quiet for the most of the opening forty-five.

Allardyce’s men are not a defeatous bunch however and stamped their mark back on the game with a goal in the first ten minutes of the second half. Former-Anderlecht defender Kouyaté rising highest to meet a lofted Tomkin’s ball and put West Ham back in the frame.

However, even the promising late arrival of Enner Valencia did little to cause a threat, the Ecuadorian’s closest chance a header over the bar and Arsenal held on to leapfrog the Hammers in the table with a second victory in three days.

I shall now analyse the performance from back-to-front.

Far more composed and settled are the Gunners with reliable Frenchman Koscielny back in their ranks, but it seemed a combined effort in defence against West Ham, with all four maintaining exceptional physical presence. The likes of Valencia and Sakho, were out-muscled by Mertesacker, meanwhile the entirety of the backline played well in the air and managed to keep the dangerous Carroll quiet.

Monreal especially embraced this physical battle well and the way the side’s defence performed dictated the confidence further up the field, meaning we could attack with more flow.

The absence of Gibbs could have raised a few eyebrows but his replacement put in an excellent shift in both the attacking and defensive departments, while Debuchy found himself undone just once for the goal but remained consistent for the rest of the game. Per was far more vocal and his organisation of the team was spot-on. He certainly looks more comfortable with Koscielny alongside him.

The continuing man-of-the-moment Santi Cazorla put in another exquisite performance, culminating in a well-earned spot-kick to open the scoring. His confidence is through the roof and qualms regarding his physical stature can be buried after he shrugged off many a challenge in this tie to pull the strings in the Arsenal midfield and spark the second goal too.

Suited-and-booted for the West Ham game, Coquelin’s love for a bit of rough-and-tumble rendered him an ideal candidate to start and he performed well alongside Flamini in the holding roles. It was just a shame Mathieu could not do much the same, as the ex-Milan man continues to frustrate, with a great deal of mindless orders being shouted, without actually following a plan himself.

In addition, Alex Oxlade-Chamberlain showed more strength than most whilst playing in a wing role. His flair and innovation may have been at threat of damage in such an ugly game, but generally he shone through as a star performer. He tied-up one of the Prem’s best left-backs this season in Cresswell and set up Welbeck superbly for the team’s second.

After a blockbuster display on Boxing Day, Sanchez was surprisingly not among the assists or goals this time, but that does not say anything about how bold the Chilean’s efforts were all afternoon. Sanchez worked hard to keep the hosts defence on their toes and he went close to getting on the score-sheet on a couple of occasions.

The rotation across the front-line worked well and Welbeck poised a number of problems for the Hammers’ backline with his changes of position, the Englishman picking up space particularly well, leading to the goal.

Danny exhibited a poacher’s finish and may create some thinking from Wenger as to what his best attacking options are, after the former-United man showed a side resembling that of suspended Giroud. This more physical, target-man type description was coupled by quick feet from Welbeck, which could give him the advantage in future.