Arsenal get back to Premier League action when we take on Stoke at the Emirates on Sunday afternoon. Here is the side I think Arsene Wenger will select:

Arsenal get back to Premier League action when we take on Stoke at the Emirates on Sunday afternoon. Here is the side Gooner Mac thinks Arsene Wenger will select:

Goalkeeper: It’s going to be interesting to see who Arsene goes with in goal having reportedly fined Wojciech Szczesny after catching him smoking in the changing rooms after a poor performance against Southampton. David Ospina came in for last weeks FA Cup match but I think we’ll see the under-fire Pole come back in on Sunday.

Defence: The boss is expected to make a number of changes to his side with the defence no exception. Kieran Gibbs should come back in for Nacho Monreal at left-back while Mathieu Debuchy will replace Hector Bellerin on the right. Laurent Koscielny was rested against Hull last weekend but he’s expected to be recalled and start alongside Per Mertesacker in the heart of defence.

Midfield: We’ve been boosted by the return of Aaron Ramsey with the Welshman back in contention after recovering from a hamstring injury and I think we’ll see him come straight into the starting eleven. Mathieu Flamini is also likely to be recalled after missing the last two games with a knock, so Tomas Rosicky and Francis Coquelin could drop out. Mikel Arteta and Jack Wilshere remain injured so Santi Cazorla is expected to once again start in a central role.

Attack: Theo Walcott made his first start in a year last week but could drop back to the bench on Sunday as he still looks rusty and certainly isn’t up to full match speed just yet. This could see Alex Oxlade-Chamberlain return on the right wing with Alexis Sanchez playing off the left. Mesut Ozil is back in the squad but after three months out with a knee injury, I think we’ll see him start from the bench. Danny Welbeck remains out with a thigh problem but Olivier Giroud should start up front after serving a three-match ban. 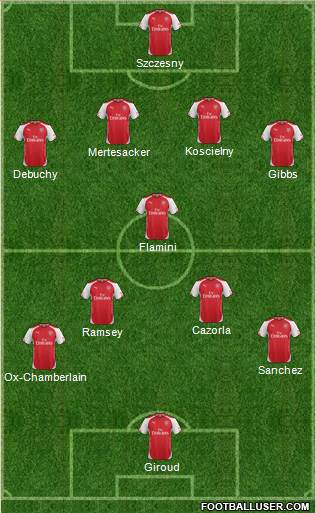