Liverpool Blow As Influential Midfielder Faces Month On The Sidelines

Liverpool appear to have been dealt a major blow with reports claiming that Lucas Leiva is facing at least a month on the sidelines with a thigh injury. 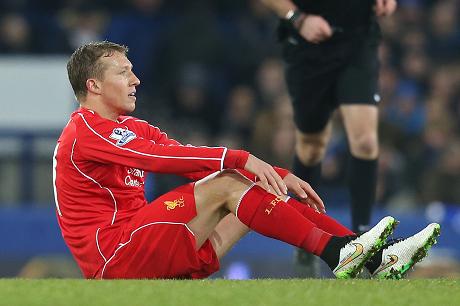 Liverpool appear to have been dealt a major blow with widespread reports claiming that Lucas Leiva is facing at least a month on the sidelines with a thigh injury.

Leiva was forced off inside the opening 20 minutes of Liverpool’s 0-0 draw with Everton at Goodison Park on Saturday evening after aggravating a thigh injury that he suffered the previous week against West Ham.

Brendan Rodgers confirmed after the game that the Brazilian would be sent for a scan to determine the full extent of the injury but it seems the club are already fearing the worst.

The Telegraph claim that the concern at Anfield is the injury is significant and will take at least four weeks to heal, while the Times go a long a similar route and say that Liverpool are already resigned to losing the midfielder for ‘several weeks’.

The Merseysiders will await the full scan results before confirming how long Leiva will be sidelined for, but if does appear that Rodgers is going to have to make-do without the midfielder for some time.

This news will come as a major blow as Leiva has been hugely influential for Liverpool in recent months since regaining his first team place. Joe Allen replaced the Brazilian on Saturday and is likely to start against Tottenham tomorrow night but it remains to be seen whether he’s the long-term solution.

Rodgers decision to risk Leiva against Everton will now come under scrutiny as the midfielder wasn’t fit to play against Bolton in midweek and was clearly not 100% when lining-up at Goodison Park.

If the four-week lay-off is confirmed, then Leiva will miss a crucial period that includes games league against Spurs, Southampton, Manchester City, their FA Cup fifth round clash against Crystal Palace and both legs of their Europa League tie with Besiktas.